Mahendra Singh Dhoni's passion for motorcycles goes back to his early college days when he used to ride a Rajdoot and over the years, he has added some very enticing possessions to his collection.
By : HT Auto Desk
| Updated on: 16 Aug 2020, 11:41 AM 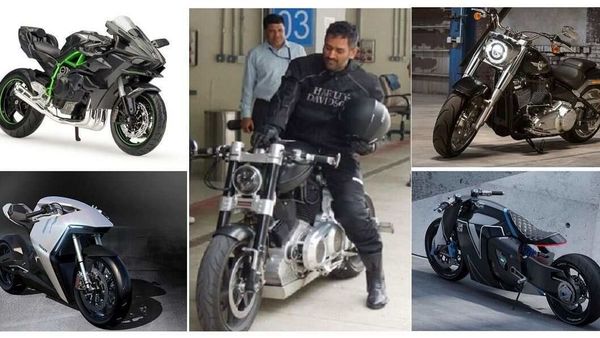 Apart from his wicket keeping and batting skills, Mahendra Singh Dhoni is also famous for his admirable collection of bikes. His love for bikes goes back to his early college days when he used to ride a Rajdoot and over the years, he has added some very enticing possessions to his collection. He also got his Yamaha RD350 rebuilt a few years back, it was his one of the first bikes.

From old-school to hypersport, Dhoni has a huge collection of motorcycles, check it out below.

Out of all, this Kawacker is one of Dhoni's favorite bikes. He is actually the very first owner of the Ninja H2 in India. Dhoni makes sure to take the supercharged beast out on a ride when has time, and he has also been spotted on some occasions with his H2.

Finally the wait is over but another couple of months before I can take her on her first ride.guess the bike

Apart from Kawasaki, Dhoni is also a big fan of Harley-Davidson bikes and he has a H-D Fat-Boy with him. The bike has been kept in his home town, Ranchi. Dhoni was also spotted riding it a few weeks back, read more about it here.

Another seductive set of wheels that Dhoni owns is the Confederate X132 Hellcat motorcycle. Dhoni has even taken it on a track day at BIC (Buddh International Circuit).

It is probably one of the rarest bikes parked in Dhoni's motorcycle garage. Along with him, other A-list celebs like Brad Pitt, Tom Cruise, David Beckham and Ryan Reynolds also own the same bike.

Another Kawasaki in Dhoni's garage is the ZX-14R. Instead of the green, Dhoni has a black unit, and its been with him for about a decade now.

Dhoni also has a Ducati 1098 in his garage. The bike was sold for a very limited period and Dhoni didn't miss the oppertunity of getting hands on one. As the name suggets, the bike uses a 1098 cc engine which delivers close to 160 PS of power. Later, it was succeeded by the Ducati 1198.

Apart for the above list, Dhoni has a bunch of more bikes such as Royal Enfield Machismo, Suzuki Shogun, Yamaha RD350, Yamaha YZF 600R, BSA Goldstar, Harley-Davidson Iron 883, a couple of Nortons and the list goes on.

Some serious deep-cleaning of his toys ... Personally done by " the man " himself !!! pic.twitter.com/k7ypGCAjzF