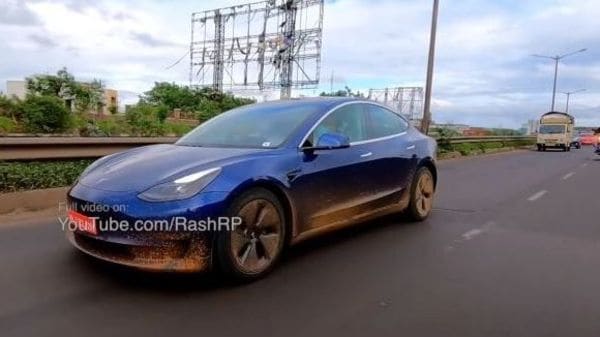 It is not a usual sight to spot a Tesla Model 3 on Indian roads. However, the car is ready to launch in the country officially. Tesla is testing the electric compact sedan ahead of that. Recently, a blue coloured Tesla Model 3 was spotted in Pune while testing. A video was uploaded on social platforms revealing several details of the car.

As the video shows it is a dual-motor variant. The particular test vehicle gets an electric motor powering each axle and sending power to all four wheels. It gets 18-inch wheels wrapped with Michelin Pilot Sport 4S Performance tyres along with an aero kit that increases the electric range slightly.

Tesla Model 3 is likely to be priced at around ₹60 lakh in India. The EV maker is yet to reveal the specification of the India-spec Model 3. The international market-spec Model 3 is available in three variants.

The electric car manufacturer imported three Tesla Model 3 sedans in India. The blue Model 3 spotted testing is one of them. These three Model 3 were imported here for testing, validation and homologation. These will be used by the Automotive Research of India (ARAI) for approvals and other compliances.

Tesla Model 3 is the most affordable electric car from the US automobile brand. The Model 3 is expected to be Tesla's first car to officially launch in India.

Tesla is expected to bring the Model 3 in India as a Completely Built Unit (CBU) from its China plant. However, if the product receives enough positive response, then Tesla would bring the car as a Completely Knocked Down (CKD) unit. Local manufacturing will certainly reduce the cost drastically. But as of now, that seems unlikely.