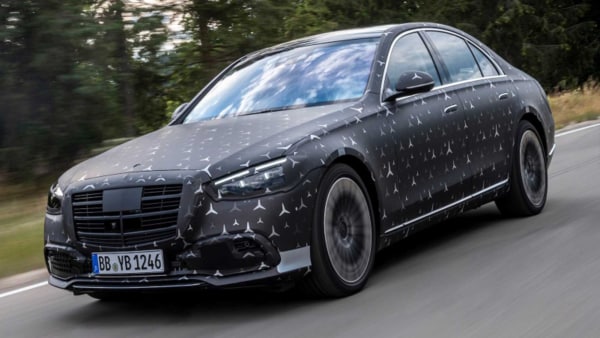 The E-Active Body Control system will be featured as an option on the next-gen Mercedes-Benz S-Class.

Only a few weeks back it was revealed that the 2021 Mercedes-Benz S-Class is going come equipped with new wing-shaped frontal airbags for the second row, now the German marquee has teased that the luxury saloon will feature a newly developed E-Active Body Control system.

For the record, the new saftey tech will be in addition to the hydro-pneumatic air suspension and rear wheel steering that 2021 S-Class promises to offer.

The E-Active Body Control system will work in-conjunction with the Pre-Safe Impulse Side collision control. It will employ wheel dampers with two working chambers featuring adjustable valve and a hydraulic pressure reservoir which lifts the vehicle up and down.

The E-Active Body Control technology is already found on the new GLE and GLS. It also scans the surface up ahead and proactively adjusts the suspension for maximum comfort and safety.

It will also get 'rear-wheel steering' which is a brand new feature for the S-Class. This system has helped the new S-Class to have a significantly lesser turning radius.

The company has already revealed the interior of the new S-Class earlier this month. Speaking of which, the new S-Class will benefit from 3D navigation maps and augmented reality which will be part of its new MBUX infotainment system. It will have a total of five screens on the inside. Two of the screens will be present for the front passengers while the rest will be there for the second row occupants. The new S-Class will come with a 12.8-inch OLED touchscreen. The company says that the use of new screen have removed 27 buttons from the centre console.

The 2021 Mercedes-Benz S-Class will make its world debut on September 2.