From Maruti, Hyundai to Mahindra: Discounts offered on new cars this Diwali 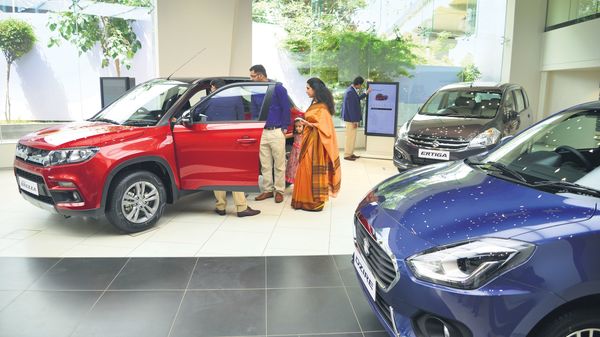 A file photo of a Maruti Suzuki's premium Nexa dealership.

Carmakers in India are offering heavy discounts on buying new cars in Diwali this year. Despite the ongoing chip crisis, which has resulted in less production and long waiting periods for new cars, the Indian car manufacturers are leaving no stone unturned to make the most during the ongoing festive season.

Here is a look at which carmaker is offering what as part of its Diwali car sales this year:

Maruti Suzuki is offering heavy discounts on as many as eight of its existing models. Its S-Presso and Alto have the maximum discounts. Maruti is offering up to ₹48,000 benefits on a new S-Presso, while the old warhorse Alto can be bought at a discount of ₹43,000. Other models, on which customers can avail festive benefits, are Eeco, WagonR, Swift, Dzire, Ignis and Vitara Brezza.

The Korean carmaker is offering benefits of up to ₹1.50 lakh on new cars this festive season. For this month, the discounts have been limited to five of its models, including its only electric car - the Kona SUV. Hyundai Kona, which has a starting price of ₹23.79 lakh (ex-showroom), is being offered at a maximum benefit of ₹1.50 lakh. The other models from the carmaker, which have discounts this festive season, are Santro, i20, Grand i10 NIOS and Aura. Hyundai is also offering benefits on the CNG models of Aura, Santro and Grand i20 Nios.

The French carmaker in India is trying to cash in during the festive season with discounts going up to nearly ₹2.50 lakh. The heaviest discount is on Renault's flagship SUV Duster. With up to ₹50,000 of cash benefit and a loyalty bonus of up to ₹1.10 lakh, Duster offers one of the most lucrative deals for customers looking to buy a new car in Diwali. Other Renault cars, like Triber, Kiger and Kwid, are also offered on heavy discounts.

The Japanese carmaker, which recently launched the Magnite SUV, is offering festive benefits on new cars by up to ₹one lakh for its Kicks SUV. Nissan Kicks, which has a starting price of ₹9.49 lakh, if offered with a 1.5-litre engine.

Datsun Go, Go+ and RediGo cars are being offered with festive discounts this Diwali. The carmaker is offering benefits up to ₹40,000 for these cars, which include cash benefits, corporate benefits as well as exchange bonus.

Mahindra and Mahindra is offering festive discounts on only as many as siz models in October. The Alturas G4 SUV, which competes with the likes of Toyota Fortuner and MG Gloster, is being offered with festive benefits of up to ₹81,500. The benefits include additional offers worth up to ₹20,000. Other models included under festive benefits are KUV100 NXT, Bolero, Scorpio, XUV300 and Marazzo MPV.

Tata Motors, which has launched Punch sub-compact SUV a day after Dusshera festival, is offering festive benefits on most of its flagship cars this season. This includes models like Nexon, Tiago, Tigor, Harrier and even the Safari SUV. The benefits range between ₹15,000 and ₹40,000 depending on models. The Safari and Harrier SUVs attract most amount of benefits, which does not include cash benefits.