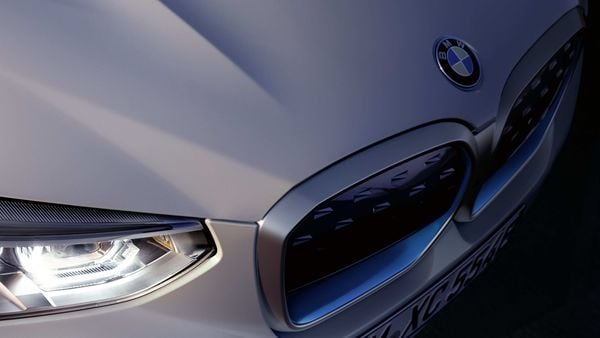 BMW has said that the new iX3 will be powered by a 74 kWh battery and will have a range of more than 440 km. (Photo courtesy: Twitter/@BMWi)

BMW is getting ready to launch its first-ever iX3 electric Sports Activity Vehicle soon. The carmaker recently took to social media to tease the upcoming electric vehicle extensively. The production of the new iX3 is expected to start soon and the first deliveries are likely to take place before the end of the year. The iX3 will take on rivals like the newly launched Audi Q4 Sportback e-tron concept.

The BMW X3 will become the brand’s first model available both with conventional petrol and diesel engines as well as a plug-in hybrid and purely electric drive.

The teaser images revealed by the carmaker give a hint at the design elements of the new iX3. At the front, the car will receive a completely closed radiator grille, as well as a redesigned bumper, which has vertical air intakes. The wheels are aerodynamic. The fender vents at the front will wear the 'i' badging. The bumper at the rear will be new as well.

The iX3 model has earlier been revealed a number of times in camouflage by BMW while it was being tested on different surfaces. The company has already revealed the specs, leaving nothing but its price and launch date to imagination.

BMW has said that the new iX3 will be powered by a 74 kWh battery and will have a range of more than 440 km within the legislative WLTP test cycle.

Technology of the future for the driver of the present. The first-ever #BMW iX3 is coming soon.#THEiX3 pic.twitter.com/y6Z3kRyt8q

Within its segment, the BMW iX3 boasts not only a unique low power consumption of less than 20 kWh/100km accordingly to the WLTP test cycle, but also stands for a novel ratio between battery size and range.

The electric motor featured in the BMW iX3 delivers a maximum power output of 210 kW/286 hp. The torque of 400 Nm allows for high initial acceleration and keeps a high level even at the upper motor speeds. It also transfers power to the rear wheels.

The BMW iX3 electric SUV is based on the BMW X3, the brand’s first model available with both conventional petrol and diesel engines, a plug-in hybrid system or a pure electric powertrain. The BMW iX3 already comes with fifth-generation BMW eDrive technology, including a drive unit with the electric engine, power electronics and transmission highly integrated into a central housing.

The fifth-generation electric powertrain also includes new and more powerful high-voltage batteries. Thanks to their scalable, modular design, these can be used flexibly in the respective vehicle architecture and at the respective production locations.