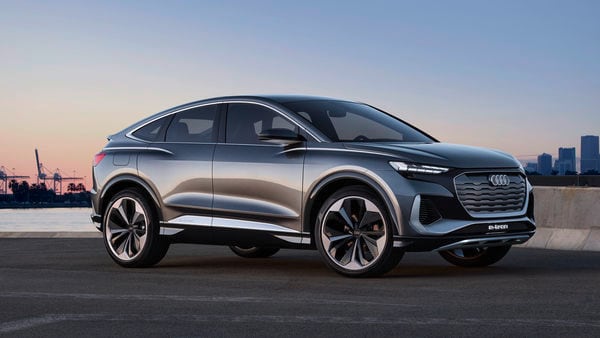 Audi is looking at launching 20 automobiles with all-electric drive by 2025. The Q4 Sportback e-tron concept provides an early glimpse into the strong steps in that direction.

Audi Q4 Sportback e-tron concept recently broke cover and the German auto giant made its intentions of taking on the future of mobility by its electric horns amply clear. The vehicle is the second model of the product line after the Audi Q4 e-tron concept was showcased at Geneva Motor Show in 2019 and will go into production as an SUV coupe as early as 2021.

The driving force behind showcasing the Q4 Sportback e-tron concept is to both present its capabilities in the electric mobility sphere as well as provide prospective customers an option to consider before possibly firming up on reasons to get behind the wheels next year.

And there are reasons galore that make a solid case for the Q4 Sportback e-tron concept to be an extremely capable offering once it does hit the production lines. It is not its dimensions though that the Sportback truly shines. The strength lies in how the vehicle stands and the technology it incorporates. Based on modular electrification platform (MEB), it could well be one of the most striking vehicles in visual terms if the production version retains most of the elements from the concept version. This includes a prominent light band connecting the rear lights, the downward sloping roofline which transitions into the D-pillars and ends in a horizontal spoiler, an upright octagonal frame at the front in place of a traditional radiator grille, pronounced fenders of all wheels and 22-inch alloys which combine to give it a dominantly stylish presence. Even the choice of colour in which the concept was presented - kinetic gray - seeks to embolden the visual appeal of the vehicle while there is a clear emphasis on lending a wider shape. 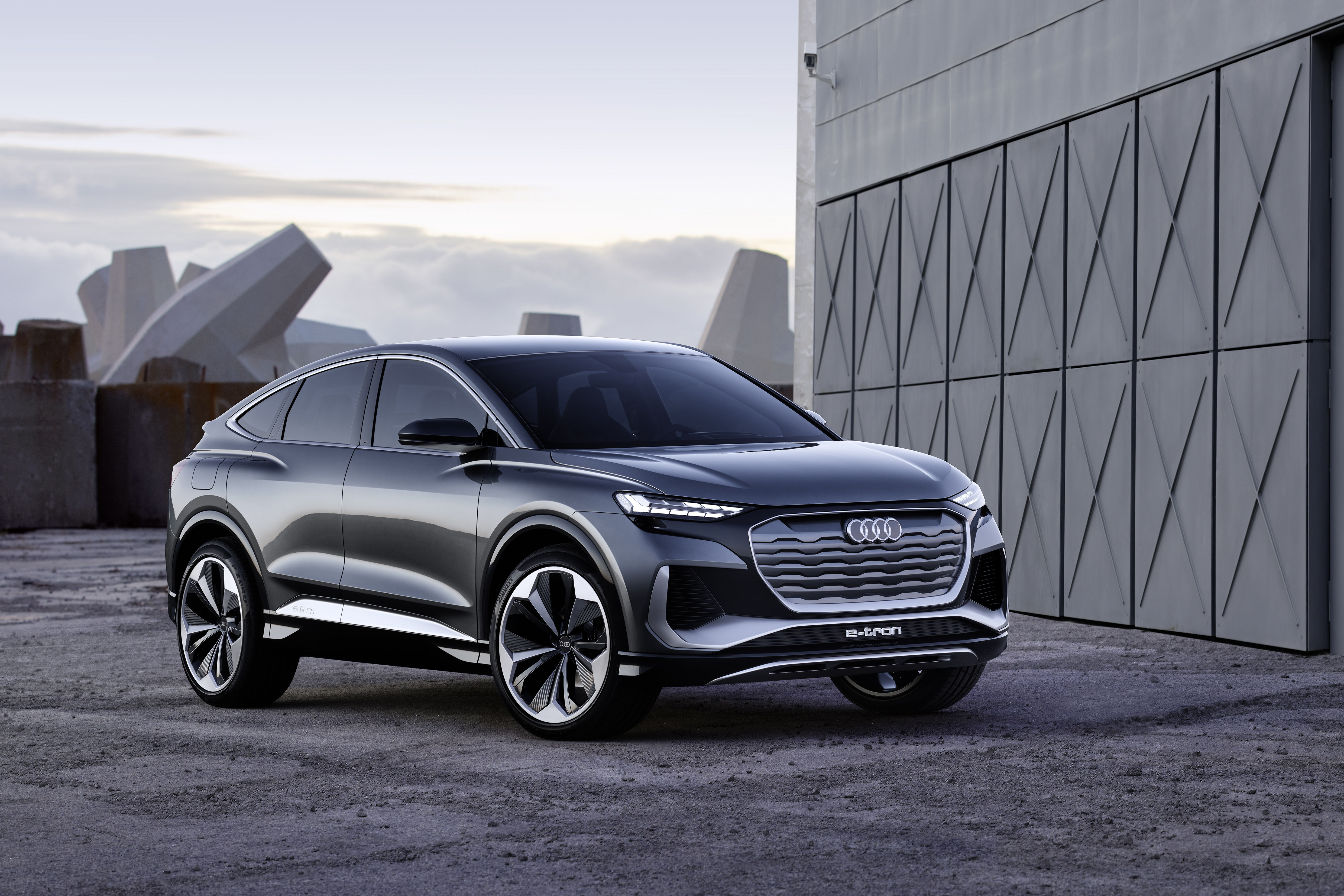 There is a clear emphasis on giving the Q4 Sportback e-tron concept a wide profile for a dominant road presence.

It may be a compact SUV but Audi claims that the massive space inside would put the Sportback into a class higher. This has been made largely possible due to the absence of a transmission tunnel which has freed up space in terms of legroom at the front and at the rear. The cabin has a refined minimalist appeal with a tinge of sportiness.

The floor covering is made of recycled materials. Instead of chrome-plated metal decor frames, the surfaces are covered with a high-quality multi-layer paint finish. The four seats with integrated head restraints are upholstered with Alcantara material while double seams stitched with thick yarn adorn the upholstery. 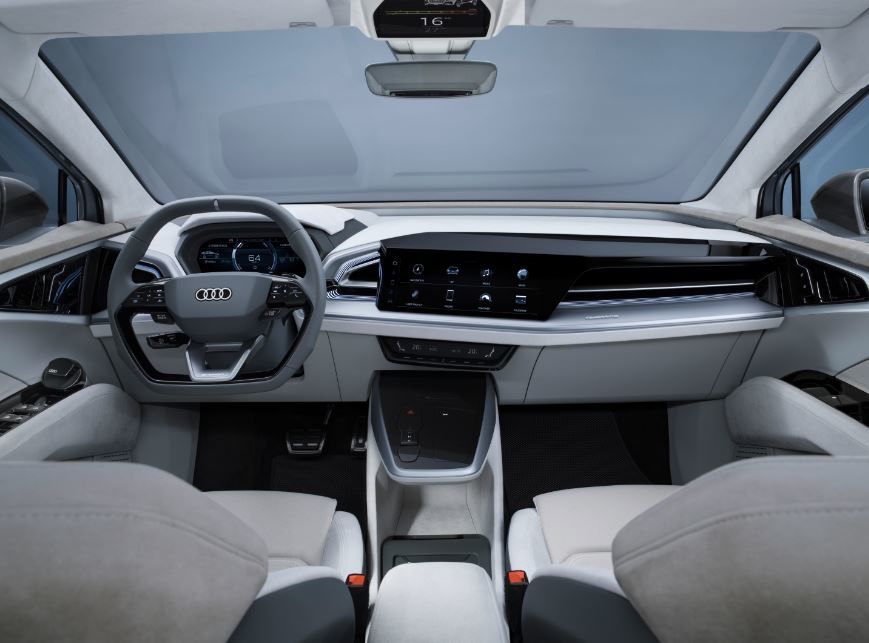 The cabin of the Q4 Sportback e-tron concept blends sophistication with practicality and boasts of features galore.

The screen display for Audi's virtual cockpit puts out important information including speed, charge status and navigation, and is smartly nestled behind the wheel while large-format head-up display with an augmented reality function comes in as a major highlight as well. Audi says this HUD will also display important graphical information, such as directional arrows for turning.

An imposing, yet not distracting, 12.3-inch touchscreen on the centre dash is oriented towards the driver and touch switches for AC control sits just under it. Touch controls for the infotainment screen are also located on the steering.

And because practicality cannot be made subservient to style and panache, a stowage compartment has been accommodated in place of where a gear lever or hand brake would have otherwise been at. This includes a cell phone charging cradle. Just ahead of it is a horizontal section which has the selector button for the transmission mode integrated into it.

Out in the real world, the Sportsback has the potential to rev up electric mobility space courtesy its advanced technology that marries performance with efficiency. The concept vehicle mainly uses its rear electric motor in order to achieve a higher efficiency and the drive torque is generally distributed with a rear-axle bias.

Need more power? Need say no more. The electric all-wheel drive can also use the front asynchronous motor to redistribute the torque as required to the front axle - a feature which automatically comes into effect in slippery conditions or when taking corners at considerable speeds.

The electric motor in the rear has an output of 201 bhp and mobilizes a torque of 310 Nm. The front motor supplies the front wheels with up to 100 bho and 150 Nm. And the most important aspect - the range of the vehicle - is taken care of by a large battery with a capacity of 82 kilowatt hours and one which sits in the underbody area between the axles. Audi claims that the vehicle has a range of 450 kilometres and that certain versions of the rear-wheel drive would be able to even breach the 500 kilometres-mark. 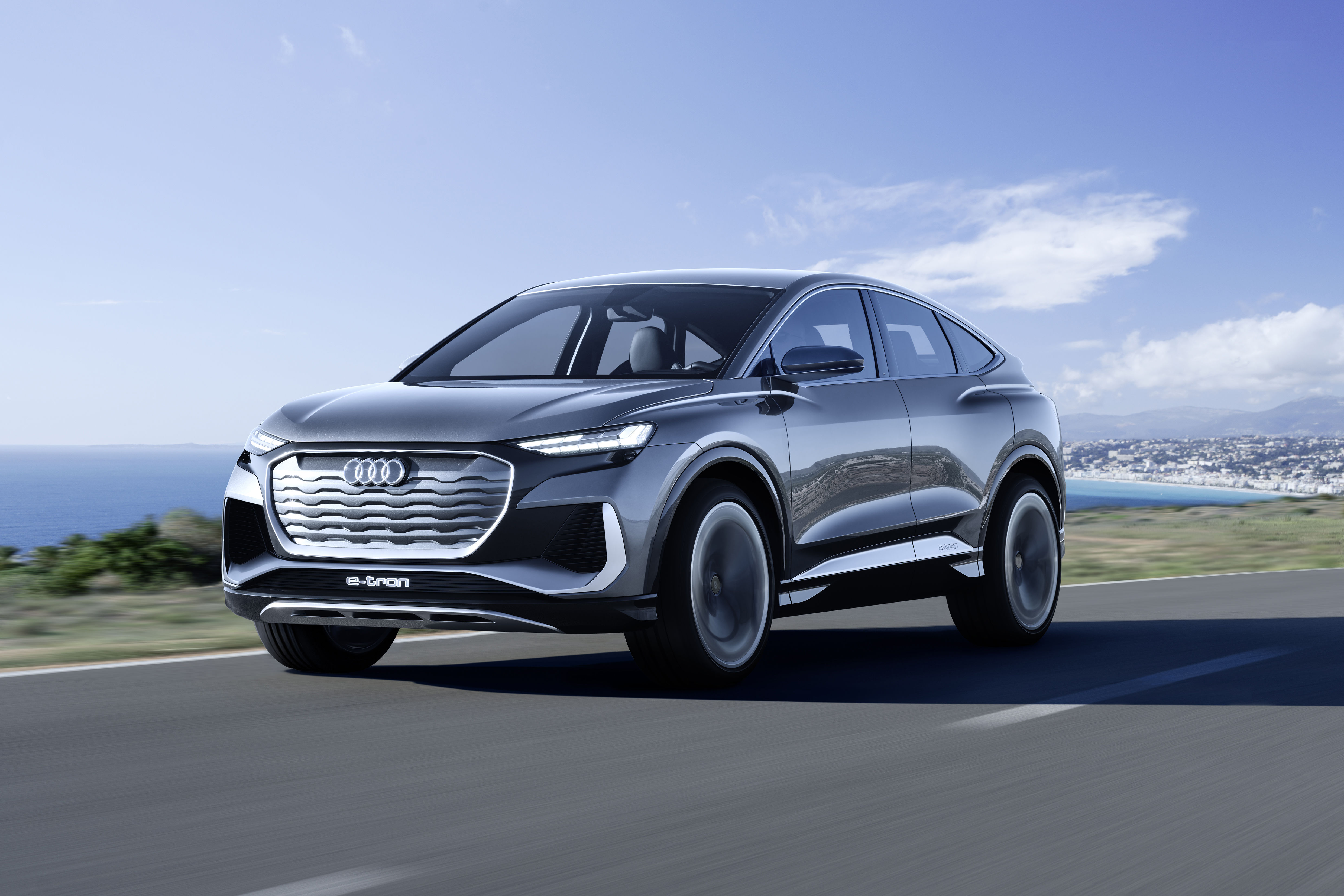 The Q4 Sportback e-tron concept has a restricted top speed of 180 kmph.

When not pondering about the stamina, the Sportsback can also be quite the power player with a claimed zero to 100 kmph in 6.3 seconds. A drag coefficient of 0.26 further allows it to rip wind resistance to shreds even if the top-speed is restricted to 180 kmph, possibly due to safety concerns.

Audi credits most of the sporty character and drive dynamics of Q4 Sportback to the low and central position at which the drive components are installed. The high-voltage battery system, for instance and as mentioned previously, sits between the axles in the form of a flat, broad block beneath the passenger compartment. The center of gravity of the Audi Q4 Sportback e-tron concept is therefore at a similar level to that of a sedan with a conventional drive system. All of these factors - looks, cabin, battery placement and more - combine together to make Audi extremely confident of what the Q4 Sportback can achieve once it starts rolling off production line. The company has outlined how Q4 e-tron and the Q4 Sportback e-tron will light up the path ahead in which it will put out 20 automobiles with all-electric drive by 2025. The objective is to achieve around 40% of all sales through electrified models - from compact class to the luxury class. If the Q4 Sportback e-tron concept is a sign to go by, it could well be a charged up reality for the German giant.