The new Audi Q5 facelift SUV has ditched diesel, and now comes with a BS 6 compliant petrol engine. The 2.0-litre four-cylinder engine, mated to a seven-speed dual-clutch transmission, can produce 249 bhp of power and 370 Nm of peak torque.
By : Sabyasachi Dasgupta
| Updated on: 23 Nov 2021, 01:06 PM 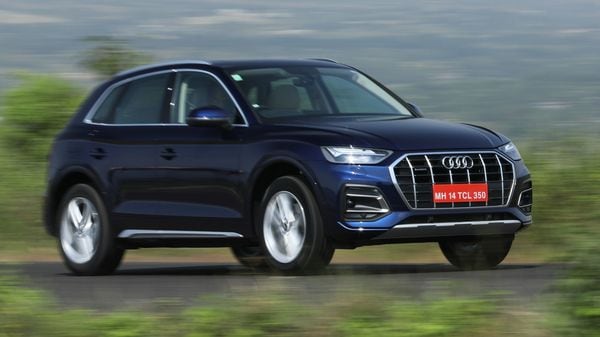 The Q5 has made a comeback in India after almost two years after Audi launched the new generation SUV at a price of ₹58.93 lakh (ex-showroom).

Audi Q5 facelift SUV, which was pulled out of Indian markets due to stricter BS 6 emission norms around two years ago, has made a comeback in a new avatar. The German carmaker launched the 2021 Audi Q5 SUV at a starting price of ₹58.93 lakh (ex-showroom) in India today. Audi has confirmed that already more than a hundred units have been booked and that deliveries are expected to start soon.

With the new Q5, Audi now has three SUVs in the Q family on offer, which also include the Q2 and Q8 besides the performance version RS Q8. This is also Audi's ninth launch in this financial year after the carmaker launched as many as five electric vehicles.

2021 Audi Q5 is available in two variants - Performance Plus trim and the higher-spec Technology trim. The price of the latter goes up to ₹63.77 lakh (ex-showroom). Audi hopes the new Q5 to boost its sales of ICE cars in India as it gets ready to take on rivals like the BMW X3, Mercedes GLC or even the newly-launched Volvo XC60.

One of the major changes in the new Q5 facelift SUV is under the hood. The German auto giant has decided to ditch diesel engine, and now offers only petrol units to power the SUV. The 2.0-litre four-cylinder engine, mated to a seven-speed dual-clutch transmission, the new Q5 can generate 249 bhp of power and 370 Nm of peak torque.

On the inside, besides the new infotainment screen, the Audi Q5 also gets all-digital driver display, updated steering wheel, upholstery in leather and plethora of features like ambient lighting, panoramic sunroof, wireless phone charging, front parking sensors and the Bang and Olufsen music system.

For the higher-spec Technology trim, Audi offers a 19-speaker sound system with 755 watts output and 3D sound effects, instead of the 10-speaker 180-watt system in the Premium Plus trim.

There is also electric boot lid with gesture control and Comfort Key for keyless entry as some of the new features included in the new generation Q5.

As far as drive dynamics are concerned, the new Audi Q5 is equipped with cruise control, hill-hold assist among others. The tried and tested Quattro all-wheel drive technology is now coupled with damping control to the suspension to reduce body roll and offer smoother ride on rough patches of roads.

The new generation Audi Q5 offers five different drive modes which include Comfort, Dynamic, Individual, Auto and a new Off-Road mode for soft off-roading. The SUV can hit a top speed of up to 237 kmph, clock zero to 100 kmph in just 6.3 seconds and returns a mileage of 17.01 kmpl, which is certified by ARAI.