Yezdi returns to the Indian market after a gap of 26 years. Check out prices, features and specifications of all three Yezdi products for India.
By : HT Auto Desk
| Updated on: 13 Jan 2022, 12:29 PM 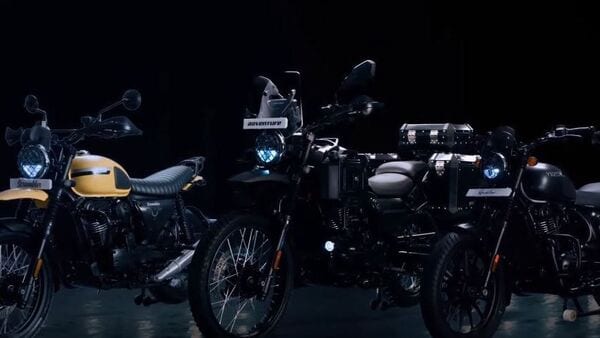 Yezdi is ready and raring for an India comeback after 26 years and is eying the market here with much anticipation. Revived under the umbrella of Classic Legends, a unit owned by Mahindra Group, Yezdi has already teased three new motorcycles for customers here.

Yezdi is now the third brand to be revived by Classic Legends after Jawa and BSA. Models like Roadking, Delux and Monarch were fairly popular till Yezdi packed up in 1996. Which new models will come in first from the Czechs and how much will nostalgia help prospects?

All the highlights from the launch event here:

* That's all from the launch event of the Yezdi motorcycles. Read full launch report here.

*Yezdi Adventure and Scrambler gets multiple riding modes to select from.

*Yezdi Roadster is meant for a regular riding experience. It blends classic style and modern elements. This could throw a tough challenge to Royal Enfield Thunderbird.

*Yezdi Scrambler is meant for both offroading and regular commuting. It sits between Yezdi Adventure and Yezdi Roadster.

*Yezdi Adventure to be the flagship motorcycle of the brand. It will compete with Royal Enfield Himalayan.

*"With Yezdi nothing is off limit," says Mahindra Group Chairman Anand mahindra.

*Yezdi motorcycles are expected to boost the charm of retro-modern motorcycles in India. Classic Legends has already done that with Jawa. Tough competition ahead for Royal Enfield.

*Yezdi motorcycles are likely to be powered by a 334cc, single-cylinder, liquid-cooled engine paired with a six-speed transmission. The engine is good to churn out 30.64 bhp of power and 32.74 Nm of peak torque. However, power and torque figures may vary for the type of motorcycle.

*Yezdi Roadking is one of the new motorcycles the brand is bringing. This is a cruiser motorcycle likely to come with circular LED headlights, taillights and turn indicators and split seats. Other design elements of this motorcycle will include cast alloy wheels, telescopic front suspension with fork gaiters, twin rear shocks and disc brakes on both wheels.

*Spy shots of the Yezdi Adventure motorcycle hint that it will come with a tall windscreen, beak-style front fender, jerry can holders, saddles stay, and a rear luggage rack. The exhaust canister seems to have been inspired by the Royal Enfield Himalayan.

*Yezdi used to sell popular motorcycles such as Roadking, Delux and Monarch in India till 1996. The new models come bearing with retro charm and modern elements.

*Mahindra Group chairman tweeted an image on Wednesday showing Jawa and Yezdi dealerships side by side. Hinting at the two brands being under Classic Legends' umbrella, Mahindra wrote, “Long lost brothers. Reunited…" The image he posted shows that the Jawa showroom has been remodelled to accommodate upcoming Yezdi motorcycles.

*Yezdi has teased all three motorcycles through its social media handles which give a clear hint at the nature of the motorcycles set to hit the Indian roads. When launched, the Yezdi motorcycles are likely to compete with rivals from brands like Royal Enfield, Honda and KTM.

*Yezdi is the third brand that is being revived by Classic Legends after it brought back Jawa and BSA to India.

*Yezdi had previously released a teaser video which showed Adventure and a Scrambler model running through a forested area. Both models had circular LED headlights and twin exhausts. On expected lines, both models were also under heavy camouflage.