Yezdi is the third brand revived for the Indian market by Classic Legends, a unit owned by Mahindra Group.The Yezdi Roadster, Scrambler and Adventure motorcycles will go up against rivals like the Royal Enfield, KTM and Honda in India.
By : Sabyasachi Dasgupta
| Updated on: 13 Jan 2022, 12:04 PM 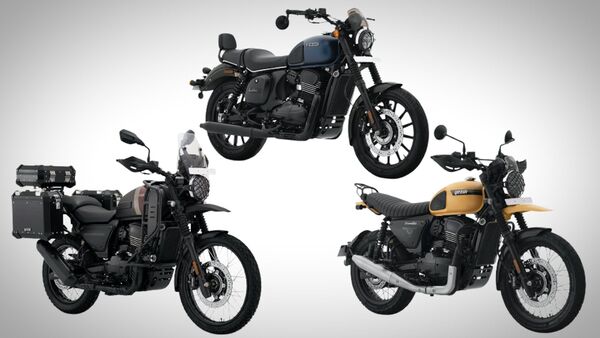 Yezdi has opened bookings for all three motorcycles today and the bikes have started to reach dealerships across India. Yezdi said it will be sharing the same showrooms with Jawa, which have been remodelled as Jawa Yezdi showrooms for this purpose. The company will use 300 Jawa dealerships to sell the bikes.

The Yezdi Roadster, Scrambler and Adventure motorcycles will go up against rivals like the Royal Enfield, KTM and Honda in India.

Yezdi is the third brand revived for the Indian market by Classic Legends, a unit owned by Mahindra Group. Earlier it revived the Jawa and BSA Motorcycle brands. With these three motorcycles, Yezdi has made a comeback after a gap of 26 years. Launched for the first time in India back in 1961, the brand became popular with its offerings like Roadking, Monarch and Delux models. However, the two-wheeler manufacturer had stopped producing its bikes in 1996.

Anupam Thareja, Co-Founder of Classic Legends, said, “Being a motorcyclist myself, this is a moment of catharsis. As custodians of the brand, we made sure that we preserve and celebrate Yezdi’s and the Yezdi rider’s essence in these new avatars. I am sure every Yezdi lover, will feel that - designed with passion and indulgent beliefs, then engineered to purpose, to make you fall in love with this motorcycle and motorcycling, again!"

Speaking on the three new models, Ashish Joshi, CEO at Classic Legends, said, “The biggest challenge for us while developing the new Yezdi motorcycle(s) was to keep the spirit intact. We also knew that the motorcycle riders have evolved over the last few decades and followed a very focussed approach. What you see now are three motorcycles ‘purpose-built’ for rider requirements across the spectrum. We have always been about redefining the Modern Classic segment in the country and have gone ahead and did just that."

Here is a detailed look at what each of these bikes offer in terms of price, features, engines and other specifications. 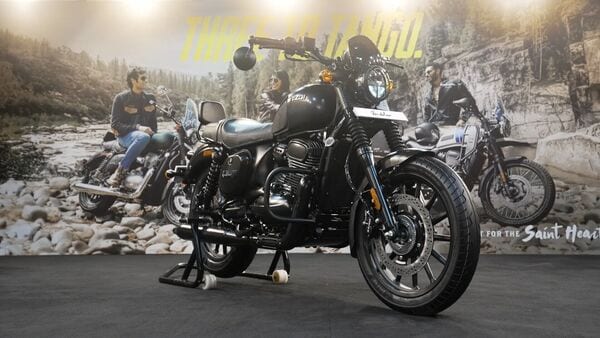 Yezdi Roadster motorcycle comes with neo-retro design style and has quite an imposing road presence.

Yezdi's cruiser bike Roadster may bring back the memory of the Roadking. With a neo-retro design style, the Yezdi Roadster has quite an imposing road presence. It comes with round LED headlights, taillights and dual exhaust. The rider console is digital encased in an LCD panel. It shows all necessary ride-related information like tripmeter, distance to empty, time, ABS mode and gear indicators.

The Roadster features dual cradle chassis. The weight of the bike is 184 kilos and the wheelbase is 1,440 mm. It has a ground clearance of 175 mm, which should be adequate for everyday ride in city conditions. Both wheels of the Roadster are tubeless. While the front wheel measure 18 inches, the rear one is 17 inches.

Yezdi has sourced the same 334cc engines that are used in Jawa motorcycles. The single cylinder liquid cooled unit on the Roadster is capable of generating output of 29.7 PS and 29 Nm of peak torque. The transmission job is handled by a 6-speed gearbox. The suspension job is handled by telescopic front forks and gas-charged twin rear shock absorbers with preload adjust.

The price of the Yezdi Roadster starts from ₹1.98 lakh (ex-showroom) and goes up to ₹2.06 lakh (ex-showroom). It will rival the likes of Royal Enfield Classic 350 as well as Meteor 350 motorcycles, among others. 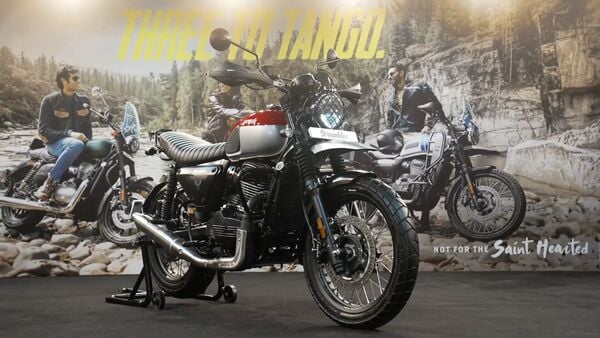 Yezdi Scrambler sits one notch above the Roadster in terms of features and specifications.

The second bike from Yezdi is in the scrambler segment. It is one notch above the Roadster in terms of features and specifications. It also comes with LED headlights, taillights besides turn indicators, clear lens and a round-shaped LCD digital display for the riders. It also gets handlebar-mounted USB and Type C charging points as standard feature.

The Yezdi Scrambler, which comes with dual cradle chassis, also features dual exhausts. The bike weighs 182 kilos, has a wheelbase of 1,403 mm and stands on 19-inch front and 17-inch rear wheels. The ground clearance of the Yezdi Scrambler is slightly higher than the Roadster, at 200 mm.

Yezdi uses the same 334cc single cylinder 4 stroke liquid cooled DOHC unit for the Scrambler as well. However, the performance of the bike has been modified for its purpose with minor tweaks. Mated to a six-speed gearbox, the bike can churn out maximum power of 29.1 PS and 28.2 Nm of peak torque. The suspension is similar to what the Roadster has to offer.

Yezdi offers Scrambler in six colour options. These include Fire Orange, Yelling Yellow, Outlaw Olive, Rebel Red, Mean Green and Midnight Blue. The price of the Yezdi Scrambler starts at ₹2.05 lakh (ex-showroom) and goes up to ₹2.11 lakh (ex-showroom). It will take on rivals like the Honda CB350 RS, Jawa 42 as well as the upcoming Royal Enfield Hunter. 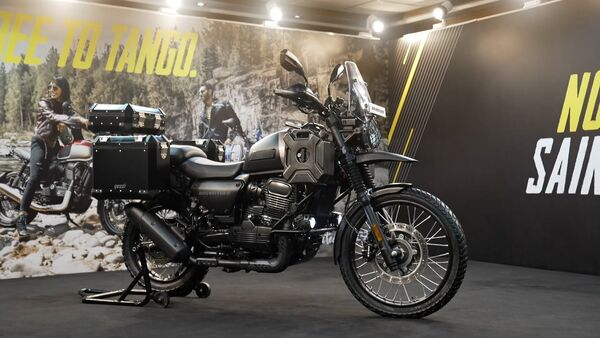 The third in Yezdi's lineup is one that will attract adventurists. Yezdi Adventure offers more features and customisation options than the other two.

The third in Yezdi's lineup is one that will attract adventurists. Yezdi Adventure offers more features and customisation options than the other two. Besides a LED headlight unit which comes wrapped in protective casing, the bike also gets LCD digital display for riders which can also adjusted by tilting for seated as well as ‘standing on the pegs’ riding postures. Yezdi says this feature is the first of its kind and will be offered as standard. The bike also gets turn-by-turn navigation as standard features.

Yezdi Adventure can also be paired with the brand's app through bluetooth. The app offers an array of features like search and locate destinations, relay turn-by-turn navigation on the display or relay navigation commentary on the intercom, records vehicle speed and engine RPM while on ride and averages of last trip when ride ends. The app also provides alerts and information like incoming calls and messages, missed calls, signal and battery strength. It also displays ownership details, with an option of adding multiple Yezdi Adventure motorcycles.

The 334cc single cylinder 4 stroke liquid cooled DOHC engine, mated to a six-speed gearbox, can produce maximum power of 30.2 PS and 29.9 Nm of peak torque. The suspension job is handled by telescopic fork and coil spring at the front and mono shock absorbers with coil spring and linkage mechanism at the rear.

As far as the accessories are concerned, Yezdi says that the Adventure will come with saddle stay system and bungee cord mounting points on three sides as standard. However, pannier bags and other Yezdi accessories can be bought through the company showrooms at an extra cost.