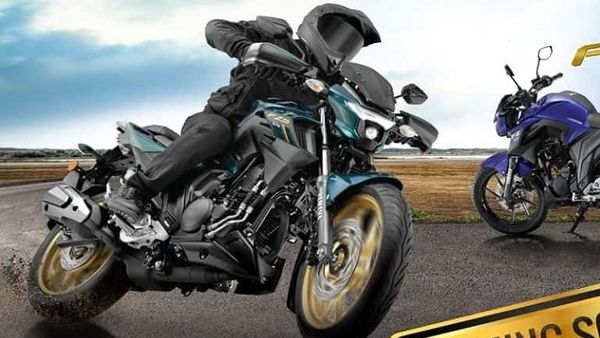 Along with the new 2020 FZ 25 BS 6, Yamaha Motor India has also launched the FZS 25 BS 6 in the country at ₹157,100 (ex-showroom). It originally debuted in February this year and was slated to launch around April, but the sudden lockdown to curb the virus outbreak forced the company to delay its launch plans. Along with the FZ 25, the FZS 25 BS 6 has also been listed online at the company's official website since April.

The bike will be made available in three colour options - Patina Green, White-Vermillion and Dark Matt Blue.

Over the previous BS 4 model, the motorcycle has been updated with a number new feature additions such as a multi-function reverse LCD instrument cluster, LED Day Time Running Lamp (DRL), bi-functional LED headlight, underbelly cowl, and side stand with engine cut-off switch. In terms of cosmetic updates, the bike now gets a stylish long visor, brush guards over the handle grips and golden coloured alloy wheels. All the new additions contribute to making it an even sportier offering.

It shares the same mechanicals as the FZ 25 BS 6. The powertrain comprise of a 249 cc air-cooled, SOHC, single-cylinder engine which delivers 20.8 PS at 8,000 rpm and 20.1 Nm at 6,000 rpm. This engine comes mated to a 5-speed manual transmission. The output from this BS 6 engine remains unaltered against the previous BS 4 unit. This is the same engine that's also found on the FZ 25 BS 6.

Its equipment list includes 41 mm telescopic forks at the front which works alongside a 7-step adjustable monoshock suspension at the rear. The anchoring duties on the bike are taken cared by a 282 mm front disc and a 220 mm rear disc. It also gets a dual-channel ABS.

It rivals the likes of Suzuki Gixxer 250 and Bajaj Dominar 250 bikes.