The biker learnt his lesson that over-speeding is bad. Worse is the bragging bit, that too on a public platform.
By : Sabyasachi Dasgupta
| Updated on: 21 Jul 2020, 06:16 PM 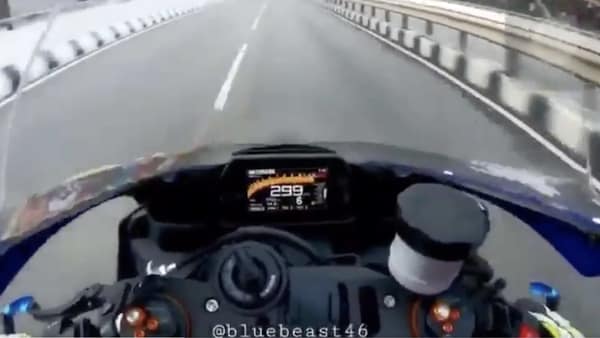 The temptation to hit top speed in a car or a two-wheeler can get one into trouble. If not, sharing a video of such traffic violation will certainly spell trouble. Recently, a biker realised the truth the hard way.

The biker shared a video of himself riding a 1000cc motorcycle at break-neck speed on one of Bengaluru's flyovers. The Yamaha R1 bike seen in the video was speeding on the 10-km long four-lane Electronic City Elevated Expressway, or popularly known as the E-City flyover.

The biker could be seen hitting dangerously high speed on a relatively narrow two-lane section with several other vehicles and two-wheelers on it. He could even be seen overtaking some of them at speed in excess of 200 kmph. His action had put several others' lives at risk, besides his own.

The video was posted by the biker on social media platform Instagram, which later was made private. It is not clear exactly when the video was recorded. But the video caught the attention of the city's law enforcement agencies. The city's crime branch acted swiftly to first identify and arrest the biker named Muniyappa as well as seize the motorcycle.

This video made viral by the rider.. going at a dangerous speed of almost 300 kmph at Ecity flyover putting his own & others life at risk..CCB traced the rider & seized bike Yamaha 1000 CC.. handed over to traffic.. #drivesafe.. @CPBlr @BlrCityPolice pic.twitter.com/RoC6csoR38

Sandeep Patil, the Joint Commissioner of Police (Crime), Bengaluru City, took to Twitter to share the update. He said, "This video made viral by the rider.. going at a dangerous speed of almost 300 kmph at Ecity flyover putting his own & others life at risk..CCB traced the rider & seized bike Yamaha 1000 CC.. handed over to traffic."

The Bengaluru Traffic Police also shared the video from its Facebook account with a remark - 'Drive Safe'.

It is not yet known what kind of charges the biker will face. It will be interesting to know how the biker would explain the reason behind reckless speeding, especially when the city is witnessing a strict lockdown due to the ongoing Covid-19 pandemic crisis. Either way, the biker surely would have learnt his lesson that over-speeding is bad. Worse is the bragging bit, that too on a public platform.