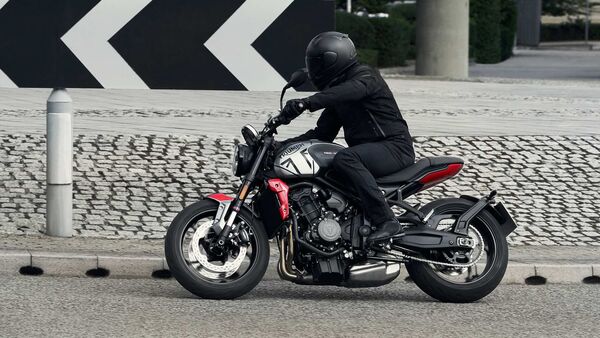 Triumph Motorcycles India on Tuesday announced that it has increased the price of its entry-level roadster Trident 660 in the Indian market. The motorcycle has become costlier by up to ₹50,000 and it now costs ₹7.45 lakh (ex-showroom). The latest pricing comes into effect starting from today (February 1st, 2022). The company hasn't disclosed any specific reason for the latest price hike.

The bike was originally launched in the Indian market in April 2021. It was announced at an introductory price of ₹6,95,000 (ex-showroom). The Trident also marked the company's foray into the premium middle-weight roadster segment in India.

At the heart of the Trident sits a 660 cc triple-cylinder engine which delivers a peak power output of 81PS at 10,250rpm and a maximum torque of 64Nm at 6250rpm. The gearbox on the bike includes a 6-speed unit. Developed in Triumph's headquarters in Hinckley, UK, Trident is claimed to offer a mixed bag of performance, ease of riding as well as precise and accurate handling.

The key features of the Trident 660 include full-LED lighting and a Bluetooth-ready instrument cluster. The latter is part of the optional kit on the bike. It is offered in a single variant and four colours options including Matt Jet Black & Matt Silver Ice, Crystal White, Silver Ice & Diablo Red, and Sapphire Black.