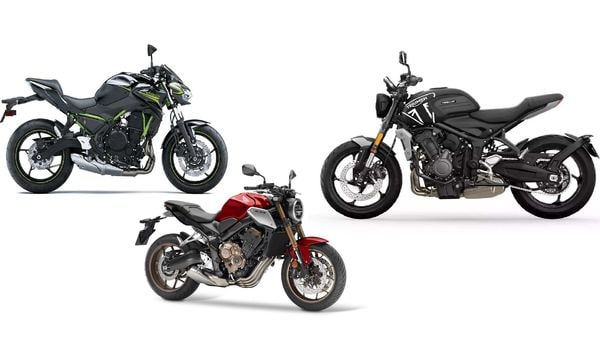 Middleweight roadster motorcycle segment in India is now occupied with some very capable offerings from Kawasaki, Honda and Triumph.

Triumph Motorcycles India launched the new Trident 660 roadster bike at a price tag of ₹6.95 lakh (ex-showroom). At this price, the middleweight roadster rivals the likes of the Kawasaki Z650 and the Honda CB650R. The company mentioned that the pricing is introductory and is bound to go up in the next few months.

The bike has been launched in India as a CKD (Completely Knocked Down) product and thus, Triumph has managed to price it aggressively against the other middleweight motorcycles.

As for the mechanical specifications, the bike gets a new 660 cc in-line triple-cylinder, liquid-cooled powertrain which churns out 81 PS maximum power at 10,250 rpm and 64 Nm peak torque at 6,250 rpm. As per the official claims, the engine delivers 90% of the maximum torque throughout the rev range. It also gets a slip and assist clutch and a 6-speed transmission unit.

Here is how it rivals against it competition bikes in terms of overall pricing and value proposition:

The Z650 has retained its crown as the most-affordable middleweight roadster (not counting the RE 650 Twins) in India. It is offered as a naked iteration of the highly popular Ninja 650 motorcycle and uses the same technology. At the heart of the Z650 sits a 650 cc twin-cylinder engine which comes mated to a 6-speed manual gearbox.

Honda Motorcycle and Scooter India last month introduced the new 2021 CB650R naked middleweight streetfighter. It is a naked version of the fully faired CBR650R motorcycle and uses the same technology too. It has been priced the highest in the list at whopping ₹8.67 lakh (ex-showroom, India). For the record, it is only ₹21,000 more affordable than its faired counterpart (CBR650R) which is priced at ₹8.88 lakh (ex-showroom, India).

It features a 649 cc, DOHC 16-valve engine that's rated to pump out 64 kW of maximum power and 57.5 Nm. The transmission option includes a six-speed unit.