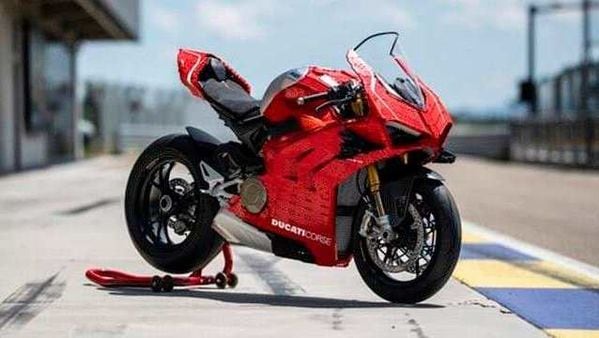 Ducati recently launched the Technic Ducati Panigale V4 R kit and also commenced the production of the Superleggera V4 super bike in its Italy plant. Now the company has taken the covers off the full-sized hand-built LEGO Panigale V4 R.

It is a hand-built model by LEGO certified professional, Riccardo Zangelmi and his team. It took more than 400 hours and 15,000 Technic bricks to bring the project to completion. The maker didn't use glue for the bricks and anchorages and the model was built/disassembled 8 times before reaching the perfect replica state.

The LEGO Panigale V4 R is basically a real Panigale V4 R minus the stock fairing. So underneath, it employs the same frame work and mechanicals. Speaking of which, the bike gets an operational 998 cc Desmosedici Stradale R powerplant that's known to push out 217 PS of maximum power and 112 Nm of peak torque. Moreover, the stock Ohlins suspension setup remains the same.

"I am very happy because I never imagined I'd have the chance to unveil a bike like this. Almost everyone at some point in their lives has played with LEGO bricks at least once, but seeing up close a replica of the Panigale V4 is something incredible and at a very high level. I would like to congratulate the LEGO artist Riccardo Zangelmi for building such a true to life and detailed version of the motorcycle. I am sure children and adults alike will be captivated by this incredible model," said Dovizioso.

(Also Read: As motorcycles roar back, here are the best bikes to buy for summer)