Home Auto Two Wheelers This Et Looking Scooter Flew Off The Shelves Even Before Launch. Here's Why

This ET looking scooter flew off the shelves even before launch. Here's why

As per Italjet about 90% of the Dragster scooters produced are meant for the exports to the global markets such as Germany and the UK which are among the biggest buyers.
By : Prashant Singh
| Updated on: 16 Jun 2020, 06:38 PM 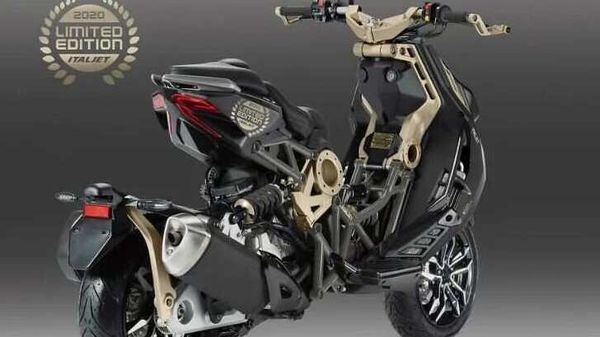 The Italy based scooter maker, Italjet revealed a special edition Dragster scooter to commemorate the launch of the new completely reworked 2020 Dragster. The limited-edition Dragster has been given an exclusive black and magnesium gold-colour scheme and is limited to just 499 units.

When the pre-orders for the 2020 Dragster opened in February, the company decided not to blow the cover and waited till March to announce that there is also an enticing black/gold limited-spec colour on the scooter. Later, the company gave the costumers who've pre-booked the new Dragster a choice to switch their bookings to this limited-edition choice.

Italjet also announced that the limited edition colour will not be introduced again once all 499 units have been booked, and that definitely makes it a collector's item.

While the all-new Dragster scooter was earlier planned to go on sales in May, the plans have been delayed and it will now arrive only by September in the international markets.

As per Italjet about 90% of the Dragster scooters produced are meant for the exports to the global markets such as Germany and the UK which are among the biggest buyers.

The 2020 Dragster employs an independent hub steering system with a new front single-arm made from aerospace aluminium alloy. At the front, sits a horizontal fork which makes it look unique. The exposed trellis frame runs through the front foot board and adds to its radical design language. The alloy wheels get a diamond finish and look very premium.

The standard paint scheme on the scooter includes three colour choices - red and white, anthracite and yellow, and black and grey.

Though the company has some Asian markets including Philippines on the radar, India is not a high priority market for Italjet currently.