Royal Enfield has included an integrated catalytic converter in the exhaust system of both the 650 Twins in order to achieve the stricter BS6 emission compliance.In the comparison to the BS4 compliant models, the overall pricing has been raised in the range of ₹8,500 to ₹9,600.
By : Prashant Singh
| Updated on: 22 Mar 2020, 02:14 PM 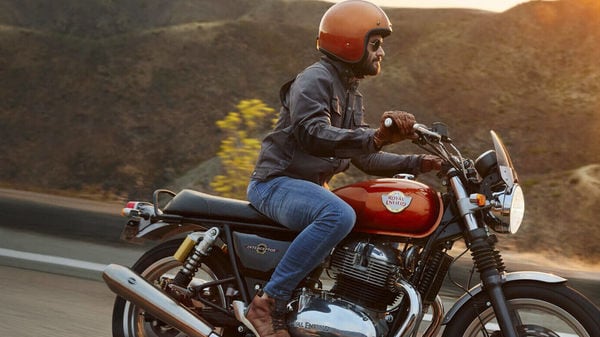 The Royal Enfield Interceptor 650 BS6 and the Continental GT 650 BS6 has been launched in the Indian market. While the former has been given a price tag of ₹2.65 lakh*, the latter is priced at ₹2.80 lakh*.

In the comparison to the BS4 compliant models, the overall pricing has been raised in the range of ₹8,500 to ₹9,600.

Apart from the BS6 compliance, there isn't any major update on the bikes. Both source power from the same 649 cc, parallel-twin, air and oil-cooled engine which is known to return 47 PS of power at 7,250 rpm and 52 Nm of peak torque at 5,250 rpm. The engine comes teamed-up with a 6-speed gearbox. The output remains unchanged in the BS 6 configuration.

The company has included an integrated catalytic converters in the exhaust system in order to achieve the stricter BS6 emission compliance.

There is no change in cycleparts and equipment and the 650 Twins retain the same chassis, brakes and suspension. At the front, the bikes feature a 320 mm disc while the rear braking duty is performed by a 240 mm disc. ABS comes standard for obvious reasons.

Moreover, both the bikes use conventional forks at the front, while twin gas-charged shocks with preload adjustment take care of the rear-end.

The 650 Twins also share the same retro-looking twin-pod cluster with an analogue speedo and tachometer. The former also houses a small digital pod which is good enough to display all the information including fuel level, odometer and two trip meters, on the go.

In other developments, the Chennai based two-wheeler maker has announced that it has entirely cleared-off the BS 4 stocks and will be one of the first two-wheeler brands in the India to only have BS 6 products. (Read more about it here).