Royal Enfield Himalayan 2021 to launch this month: What to expect

With the yearly update, the Royal Enfield Himalayan will receive several minor changes inside out. Himalayan is also likely to become slightly costlier with the new update.
By : Prashant Singh
| Updated on: 14 Jan 2021, 14:04 PM 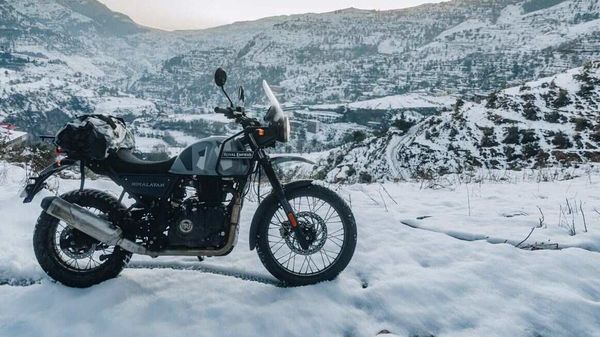 Royal Enfield Himalayan is about to get an yearly update later in January 2021. (Photo courtesy: Royal Enfield)

Royal Enfield Himalayan is about to receive an update later this month. A prototype of the updated motorcycle was also spotted rolling on public roads recently indicating that the official launch is nearby. With the yearly update, the Himalayan will receive several big and small changes inside out. Here's a list of some of the tweaks the bike may carry over the outgoing model.

A recent spy shot suggests that the new Himalayan will receive new colour schemes for 2021. There will be optional dual-tone and matte finish shades. Moreover, also expect a new pine green shade to be included in the updated Himalayan. Reports suggest that firm may also discontinue the solid white colour scheme sold currently.

After the Meteor 350, Himalayan will benefit from the 'Tripper Navigation' feature. The prototype was also seen kitted with an additional dial for the navigation which is a clear indication that the ADV is going to be updated with this new feature.

Other minor updates the adventure tourer will receive include the use of metal frame that is mounted towards the front of the tank. For the record, the outgoing model has a different setup.

In addition to this, the bike may also receive other new bits, info of which may be revealed later this month. With the launch, Himalayan may also become slightly costlier. Currently, the motorcycle costs in the price range of ₹1.91-1.96 lakh (ex-showroom, Delhi).

The Chennai-based bikemaker is also gearing up to launch several new bikes such as the new-gen Classic 350, a 650 cc cruiser and much more.