Royal Enfield Himalayan will receive an official update later this year.Royal Enfield aims to introduce at least 28 new models in the next seven years.
By : Prashant Singh
| Updated on: 05 Jan 2021, 06:12 PM 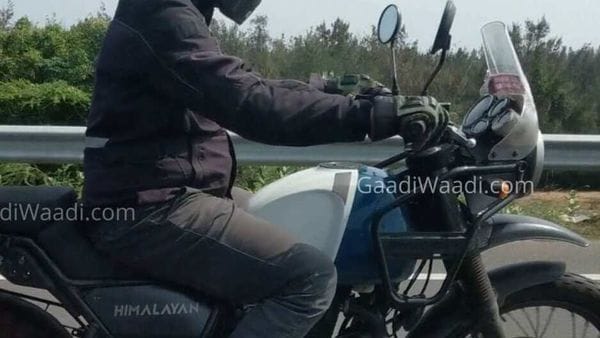 Royal Enfield is gearing up for the launch of a number of products in the Indian market this year. While there are bikes like updated 650 Twins, new-gen Classic 350, and the 650 cc Cruiser in the pipeline already, the Chennai-based bike maker was also recently spotted testing the new Himalayan which is likely to break cover by late-2021.

The new spy image reveals that the updated Himalayan will be given Tripper Navigation feature which was first introduced on the Meteor 350 bike last year in November. The prototype's instrument console can be seen having an extra dial towards the right side for the navigation informatics.

Apart from the Himalayan, Royal Enfield is likely to update a majority of its portfolio with the new navigation feature in the future. Other minor updates on the upcoming Himalayan include a completely new paint theme and a rear grab handle, which is new for the bike. Currently, the ADV is being offered in six different paint schemes - Granite Black, Snow White, Sleet Grey, Gravel Grey, Lake Blue and Rock Red.

In terms of mechanicals, the bike will continue with its BS 6-compliant 411 cc, single-cylinder, air-cooled motor that's known to deliver 24.5 bhp of maximum power and 32 Nm of peak torque. The transmission unit will also likely remain the same 5-speed unit.

The Chennai-based bike maker has said in the past that it aims to introduce at least 28 new models in the next seven years, with one new bike set for every quarter. (Full details here). Royal Enfield also plans to come up with an assembly facility in Thailand in the next 6-12 months followed by Brazil.