Royal Enfield 650 cc cruiser is expected to launch in India by late-2021.It may come kitted with Tripper turn-by-turn navigation system which was first introduced in the Royal Enfield Meteor 350 motorcycle.
By : Prashant Singh
| Updated on: 05 Jan 2021, 02:13 PM 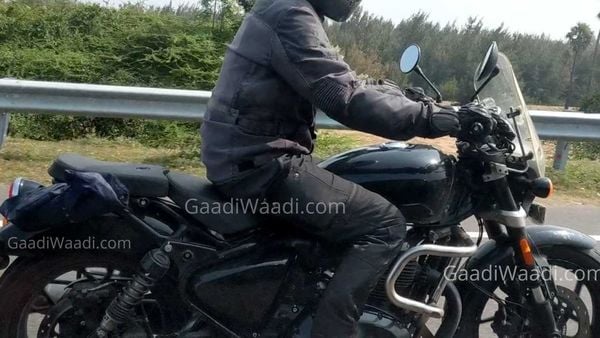 Royal Enfield is developing a bigger capacity cruiser (650 cc) which is likely to go on sale in India in the later part of 2021. The motorcycle has now been spotted once again and this time around the prototype looks close to the production form. The latest model caught on spycam (above) also throws light on some of the optional accessories that it is likely to be featured with.

On the outside, the upcoming Royal Enfield cruiser will sport an old-school round headlight along with a tear-drop shaped fuel tank, and split-style seats. It's said to have taken inspiration from the previous Royal Enfield KX Cruiser concept which was revealed a few years back, but it is too early to comment on its final design.

As seen on the spy image (above), the new Royal Enfield bike will benefit from a number of optional accessories including a tall windscreen and crash protectors. Some noteworthy bits on the bike include its alloy wheels, USD front forks and a new sub-frame which has been designed especially for the upcoming cruiser.

Goes without saying, the new cruiser is also likely to come kitted with Tripper turn-by-turn navigation system which was first introduced in the Royal Enfield Meteor 350 motorcycle. It will also be equipped with dual-channel ABS.

It will borrow the 648cc, twin-cylinder engine from the current Interceptor INT 650 and the Continental GT 650 motorcycles. This powertrain has been rated to develop 47 bhp of power and 52 Nm of peak torque. The transmission unit will also remain unchanged.