The new 120 Year Edition bikes from Royal Enfield will be made available in India via an online sale starting on December 6, 2021. These bikes will be very limitedly available worldwide as only 480 units in total will be produced.
By : HT Auto Desk
| Updated on: 30 Nov 2021, 11:11 AM 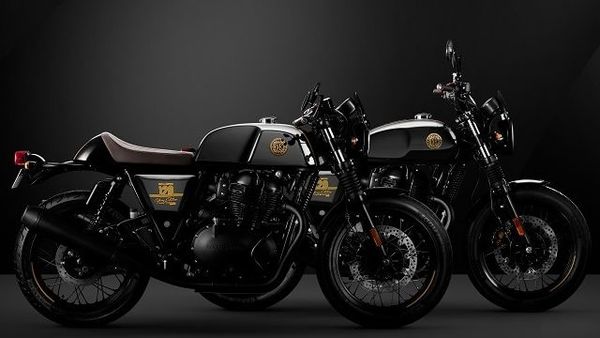 Royal Enfield has recently revealed its new 120 Year Anniversary Edition models of the Interceptor 650 and the Continental GT 650 models at the ongoing EICMA 2021 motor show. As the name suggests, the new models commemorate the 120 years of the brand's existence.

The new 120 Year Edition bikes will be made available in India via an online sale starting on December 6, 2021, while the registrations have already begun. The models will make way to the Indian market in the first quarter of 2022, the company has communicated.

These bikes will be very limitedly available worldwide as only 480 units in total of both the bikes will be produced. Out of these, only 120 units have been assigned for the Indian market, while the rest will be exported to Europe, US and South-East Asia, comprising of 60 Continental GT 650 and 60 Interceptor INT 650 for each region.

Speaking on the launch, Siddhartha Lal, Managing Director of Eicher Motors Ltd. said, “Few brands can celebrate the kind of legacy and history that Royal Enfield has enjoyed over the last century and a lot of this legacy is from the immense love the brand has received from riders through the ages. There was simply no better way of celebrating this milestone than sharing a piece of it with our consumers around the world. We are delighted to bring the 120th Anniversary Edition 650 Twin motorcycles to enthusiasts around the world, and share the brand’s legacy with them."

When launched in India, expect these limited-edition models to be priced slightly higher than the actual standard models. For reference, the Interceptor 650 Chrome costs ₹3.03 lakh (ex-showroom), and the Continental GT 650 Chrome is priced at ₹3.20 lakh (ex-showroom). Thus, expect the limited edition Interceptor 650 to be priced somewhere at around ₹3.25 lakh, while the Continental GT 650 could retail higher at ₹3.40 lakh, both prices ex-showroom.