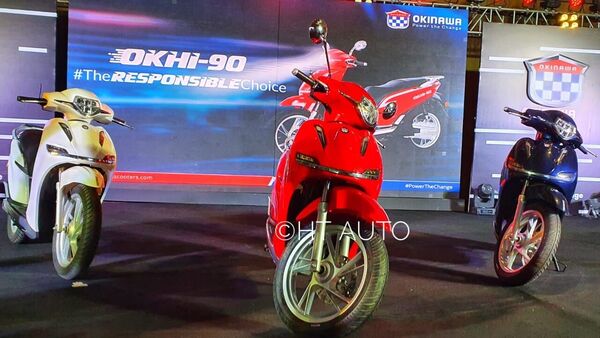 Okinawa Autotech, India's second-largest electric scooter manufacturer, is betting big on its EVs to hit record revenue this fiscal. The two-wheeler manufacturer, which has sold around 1 lakh units so far since April last year, has said that it is expecting to close the financial year with record revenue of around ₹800 crore. The brand recently launched its latest electric scooter Okhi-90, which it hopes to further bolster its position among electric two-wheeler manufacturers in India.

Jeetender Sharma, co-founder and managing director of Okinawa Autotech, was quoted by news agency PTI saying, “We have had a wonderful year, the best in every sense of the word. And we are on course to close the outgoing fiscal with a top-line of around ₹800 crore against ₹120 crore revenue we had in the pandemic-hit FY21." However, he did not divulge expected net income of the brand, saying they are profitable.

Okinawa Autotech, which was launched in India back in 2015, has so far sold 1.5 lakh units across the country. Around two-third of the electric scooters it sold so far were delivered in the last 12 months. It manufactures its electric vehicles at the Bhiwadi facility in Rajasthan. The facility has an installed capacity of 90,000 units per year and has been running at overcapacity. The brand is all set to commission its second facility soon, which will add another 3 lakh units to its total production capacity.

Last week, Okinawa launched its new flagship electric scooter Okhi-90 at a price of ₹1.22 lakh. The 2022 Okhi-90 offers range of up to 160 kms on single charge and nearly 90 kmph top speed. Okinawa hopes to sell 50,000 units of the Okhi-90, which would be a fourth of its target of 2 lakh units in the next financial year. As of now, Okinawa's Praise electric scooter is the best-selling model contributing nearly 70 per cent of its overall sales.

Okinawa sells its six models through 452 dealerships and hopes to add over 150 in FY23, Sharma said.