Hero MotoCorp's first-responder mobile ambulances: All you need to know

Hero says its mini mobile ambulances will be helpful in penetrating the rural and remote areas which are otherwise out of the reach for regular-sized ambulance vans.
By : Prashant Singh
| Updated on: 14 Apr 2020, 05:04 PM 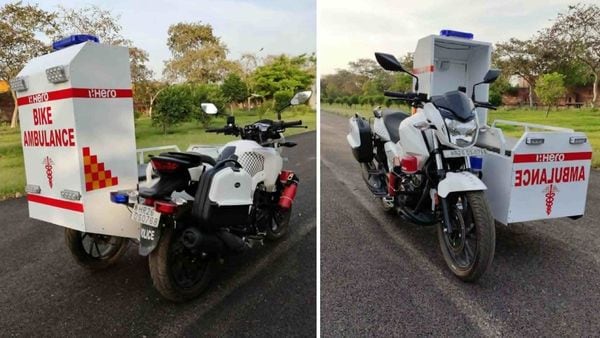 The auto giant said that the mini custom-built utilitarian mobile ambulances will be helpful in penetrating rural and remote areas which are otherwise out of reach for the regular-sized ambulance vans.

These mobile ambulances have been custom-built around the Hero Xtreme 200R motorcycle. As per the company, the ambulance accessories' kit includes first-aid kit, oxygen cylinder, fire extinguisher, siren as well as 'laying-down' arrangement for the patient.

These mobile ambulances will be provided to multiple authorities across the country.

Aforementioned, the Hero's mini mobile ambulance have been made around the Xtreme 200R motorcycle. The bike is yet to receive the required BS 6 update. It previously sourced power from a BS 4 compliant 199.6 cc single-cylinder, air-cooled engine which churned out 13.5kW/18.4 PS at 8000 rpm and 17.1 Nm at 6500 rpm. The engine came mated to a 5-speed constant mesh transmission.

There is also a semi-faired version of the Xtreme 200R bike known as Xtreme 200S. Its BS 6 model has been officially announced for the launch.

The Hero Group has previously committed a corpus of ₹100 Crore (US$ 14 million) as aid to fight against the cornavirus pandemic. It has announced that half of the sum will be donated directly to the PM-Cares Fund, while rest of the remaining amount will be spent on various relief efforts.

Besides this, the Hero Group owned 'BML Munjal University' in Dharuhera has been converted into a 2,000-bed isolation & treatment ward. Also, the company is supporting daily wage-workers, laborers and homeless families in severely affected areas of Delhi-NCR, Rajasthan, Haryana, Uttarakhand, Andhra Pradesh and Gujarat, by distributing more than 15,000 meals every day.

Hero Motocorp has also announced extension of its warranty and free services to support its customers in view of the lockdown which has now been stretched further till May 3rd. (Read full information here)