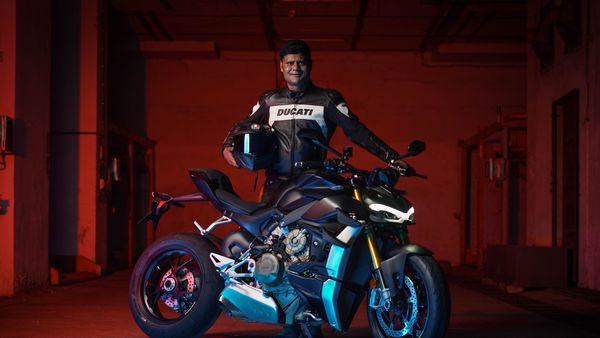 The flagship naked sport bike from Ducati has gone on sale in India in three trims starting at 19.99 lakh (ex-showroom). Image Courtesy: Twitter/Ducati

After announcing the launch of the new 2021 Streetfighter V4 naked sport bike in the Indian market, Ducati has now started delivering the bikes to Indian customers. The company took to Twitter to announce the commencement of deliveries.

(Also Read: Here's the real reason why there is no electric Ducati motorcycle anywhere yet)

Previously Ducati India has also posted an unboxing video of the Streetfighter V4 at its Pune dealership.

Say ciao to one of the first Streetfighter V4 S Dark Stealth that was delivered to Mr Aniket at his residence in Pune, by our dealer partner, Ducati Legacy Motors.#StreetfighterV4 #Ducati #DucatiIndia pic.twitter.com/Avg36QI0Pw

Braking on the motorcycle is handled by Brembo Stylema monobloc calipers with twin 330 mm discs at the front wheel, and a 245 mm disc doing duty at the rear wheel. It also comes equipped with a Sachs steering damper, and a fully adjustable Sachs monoshock.

The Ducati Streetfighter comes out as one of the best-kitted bikes of its segment as it gets features such as an up/down quickshifter and eight-level traction control. Some other key features on its list include cornering ABS, Ducati Slide Control, Ducati Wheelie Control, Ducati Power Launch, Engine Brake Control, and electronic suspension on the V4 S. If that wasn't enough, it also gets three riding modes - Race, Sport and Street.