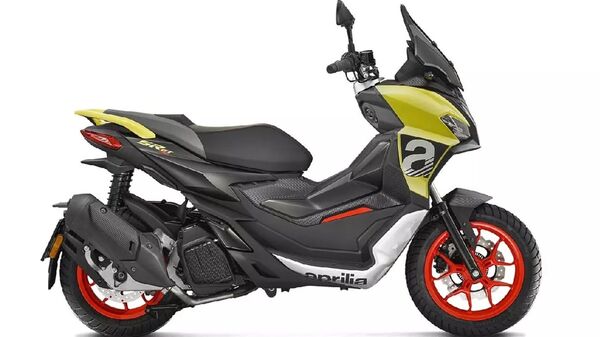 Aprilia R GT 200 features a fairly tall stance thanks to its longer travel suspension kit at either end.

Aprilia SR GT 200 scooter has been launched in the market of Japan. This scooter has been introduced as an off-road friendly offering which comes with a swanky looking and purposeful exterior design.

It comes equipped with split LED headlight topped by a smoked windscreen. The front face is reminiscent of the bigger and more premium two-wheelers from Aprilia. It features a fairly tall stance thanks to its longer travel suspension kit at either end. Also, some of the body elements such as raised exhaust muffler, sporty coloured alloys, stepped seats, and aggressive body work give this scooter a dominant appeal.

At the heart of the scooter sits a 174cc liquid-cooled single-cylinder motor that is rated to develop 17.4bhp of maximum power backed up with 16.5 Nm of peak torque. The engine comes nestled in a double cradle chassis suspended on conventional telescopic fork and dual rear springs. For transmission, the scooter uses a CVT unit. Meanwhile, braking is taken care of by a 260mm front disc and a 220mm rear disc.

Some of the key features on the scooter include the use of LED illumination, an LCD dashboard and USB socket. It also gets a Bluetooth connectivity option as well.

Meanwhile, only recently, Aprilia has announced an update to its much popular RSV4 and the Tuono V4 models for the international markets. The new 2022 version of flagship bikes have been given a new colour option called Ultra Dark. (Find more details here)