Both the 2022 Aprilia RSV4 and Tuono V4 bikes have received a new paint livery called Ultra Dark.Apart from the use of a new colour scheme on the 2022 Aprilia models, the rest of the details remain unchanged.
By : HT Auto Desk
| Updated on: 21 Jan 2022, 05:32 PM 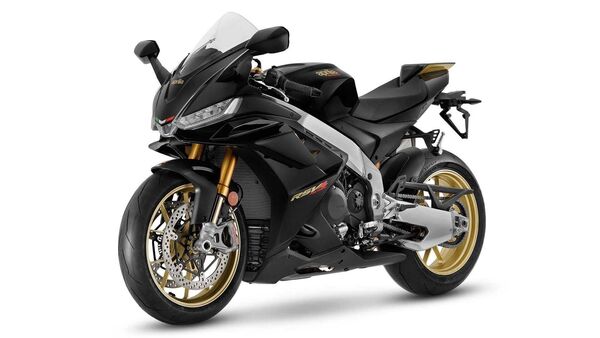 Apart from the use of new paint liveries on the 2022 Aprilia models, the rest of the details remain unchanged.

Aprilia has announced the roll out of the updated RSV4 and the Tuono V4 models for the international markets. The new 2022 version of flagship bikes from Aprilia have been introduced in a new colour option.

Both the new bikes have received a new livery called Ultra Dark. This paint scheme takes inspiration from the 2006 Aprilia RSV4 1000R. This scheme adds a matte black colour with hints of gold. Moreover, both the models sport badges, logos, and tail unit in golden finish. While the RSV4 additionally gets forged aluminum wheels.

Apart from the use of new paint livery on the latest 2022 models, the rest of the details remain unchanged. Both the motorcycles remain the same in terms of the mechanicals and features.

The 1099cc, V4 that powers the flagship sport bike from Aprilia returns the same 217bhp at 13,200rpm. And the transmission also remains the same six-speed unit.

Both the models are also expected to make their official debut in the Indian market soon. Expect the bikes to be rolled out in India in the later part of 2022.

Meanwhile, the company also introduced the smaller Aprilia RS660 in the Indian market last year, and the deliveries of the same were also started a few weeks after the launch. Female racer, Alisha Abdullah became the proud owner of the very first unit of the RS660 in the country. Abdullah shared the news over her Instagram handle. (More details here)