The 2021 Interceptor INT 650 comes with seven colour options, while the Continental GT 650 gets five new colourways.Both the bikes will also be available with a host of new MiY options.
By : HT Auto Desk
| Written By : Prashant Singh
| Updated on: 22 Mar 2021, 06:03 PM 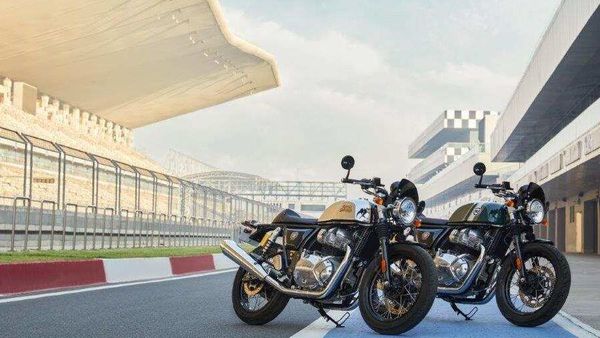 Royal Enfield has also officially initiated bookings on both the new bikes from Monday.

Royal Enfield on Monday launched the 2021 Interceptor 650, Continental GT 650 bikes with new updates and refreshed colour options. Both the bikes will also be available with a host of new MiY options which will provide customers a choice to personalise their motorcycles according to their own taste and style. The new MiY options include seats, sump guards, touring mirrors, flyscreen, and a host of other options.

The Interceptor 650 is now available in two new Standard (single tone) colourways - Canyon Red and Ventura Blue; two new Custom (dual tone) colourways - Downtown Drag, and Sunset Strip. Moreover, there is also an updated version of the ‘chrome’ variant in Mark 2. Apart from this, the bike will retain the existing single-tone Orange Crush and the dual tone Baker Express.

The Continental GT 650 cafe racer has been launched in five new colour options. It has received Rocker Red Standard (single tone) along with British Racing Green Standard. In addition to that, there are also new Custom (dual tone) colourways - Dux Deluxe and Ventura Storm, along with a tweaked chrome variant of existing Mister Clean.

The company has also officially initiated bookings on both the new bikes from Monday.

(All prices are ex-showroom India/ Kerala pricing is excluded)