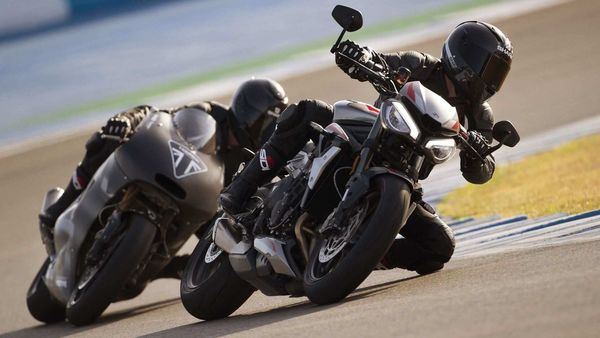 Triumph Motorcycles India has raised the pricing of the new 2020 Street Triple RS. While the bike was introduced in the Indian market at ₹11.13 lakh*, it has now become expensive by ₹20,000 and costs ₹11.33 lakh*. The same was also hinted in HT Auto's previous report back in June.

The marginal ₹20,000 hike for the facelifted Street Triple RS is still very much justified especially considering the plethora of updates the new model has received over its predecessor.

In terms of exterior appearance, the bike has a gained a distinctive looking front full LED, twin bug eye headlamp. The new unit is way sharper than before and also features LED DRLs. The new MY20 update has also brought minor changes to the bike's body panels including the radiator shroud, belly pan and the tail section. Moreover, the update list also includes a revised exhaust system which is shorter and comes with carbon-fibre finish.

On the mechanical front, the Street Triple RS gets a 765 cc three-cylinder liquid-cooled engine which is now Euro 5/BS 6-compliant. While the power output remains the same at 121 PS, the torque has been increased by 2 Nm at 79 Nm. The engine comes mated to the same 6-speed transmission but now gets slightly revised first two gear ratios. It features a quick-shifter and a slip-and-assist clutch.

The Street Triple RS remains one of the lightest bikes of its segment at 166 kgs (dry) weight.

The company is planning to rev its supernaked game back up and is working on the new 2021 Speed Triple which has been spotted undergoing testing recently. (More details here)