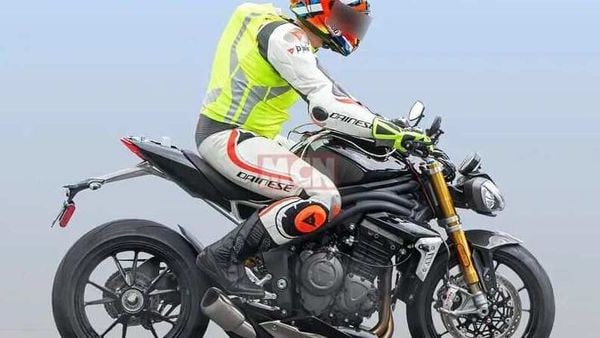 Although the Triumph Speed Triple has always been a popular bike but it has been losing ground lately with the entry of hypernakeds such as Ducati Streetfighter V4, Kawasaki Z H2 and the torque monster KTM 1290 Super Duke R.

Triumph Motorcycles aims to rev its supernaked game back up with the new 2021 Speed Triple which has been spotted undergoing testing recently. The new Speed Triple will benefit from some hefty changes introduced to its powertrain and equipment.

Judging by the new case, the upcoming Speed Triple will likely have a new powertrain and not just a tickled-up version of the previous engine. In order to stay competitive with the new-age hypernakeds, the company would have possibly raised the displacement to around 1200 cc roughly. Also the bike will most likely shed some extra kilos in the process.

The output from this engine would be around close to 175 PS. Also, it will be Euro 5 compliant and hence will employ a revised low-slung exhaust system.

Goes without saying, it will be equipped with some high-end rider aids and features such as race-spec slipper clutch, traction control, anti-wheelie, slide control and a completely new dash.

As the image (above) suggests steel trellis has been swapped with cast Aluminium. The rear-subframe design remains as is although now there is no large-sized exhaust which hangs on the side.

It will also feature a new suspension setup. The test bikes seems to be the RS-spec model which is clear from its Ohlins forks setup. Interestingly, the rear shock is now directly mounted to the swingarm which presumably makes space for the massive catalytic converter. Braking on the test unit is courtesy of Brembo.