The latest Mercedes C-Class is a leap towards offering luxury synonymous with sedans in a segment or two above it. But does the petrol motor deliver the same - or near - levels of fun as its diesel counterpart?
By : Shubhodeep Chakravarty
| Updated on: 06 Jun 2022, 02:04 PM 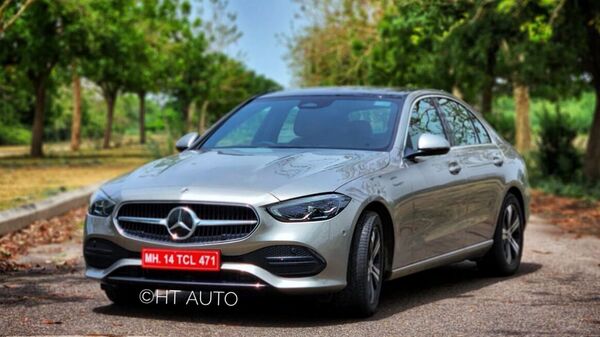 Mercedes C-Class is offered in three variants - one petrol (in pic) and two diesel engine options.

Mercedes-Benz has been steadily tightening its grip over the crown in the Indian luxury car space with both its SUVs as well as sedan models combining to provide a solid surge to sales. The ratio of demand - and therefore orders - between the two body styles is nearly similar and timely updates to proven performers has helped matters further. And while the E-Class remains the top-performer for the brand in the country and the latest S-Class is an automotive marvel, the newest C-Class was driven in last month with much emphasis on key fundamentals of style, comfort and in-cabin technology.

Unlike some of its rivals, Mercedes has been persisting with both petrol as well as diesel engine options across its model range. We had been to the scenic hills of Mussoorie just days before the official launch of the 2022 Mercedes-Benz C-Class and had had the chance to drive the C 300d, complete with its AMG line styling and dollops of confident power. Check out the full written review of the C 300d here or watch the review video below.

As much as we would have also wanted to get behind the wheels of the C 200 around the scenic hills, there wasn't enough time and so, Mercedes was quick to ship us a petrol engine-powered unit for a few days back in the hustle and heat of Delhi. In hindsight, it was quite fitting to give each variant as much time as we could and also because the 10-year ruling on diesel-powered cars in Delhi may make a much more relevant case for the C 200 here.

The C-Class has always been quite a sporty looking vehicle but in its latest iteration, it is perhaps sportier than ever. But while it is the AMG Line styling on the top C 300d that is most likely to steal repeated stares, the C 200 is quite the looker as well. 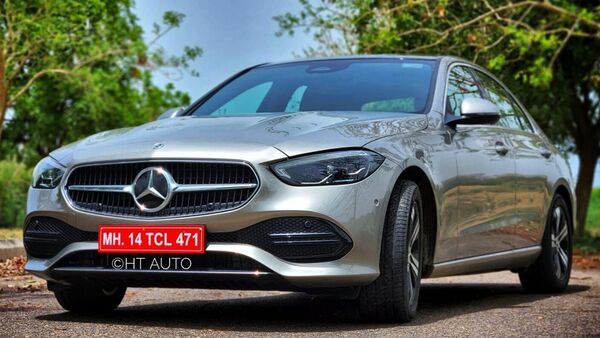 While there is styling difference between the C 200 and C 300d, all three variants of the model are the same in terms of exterior dimensions. (HT Auto/Sabyasachi Dasgupta)

The latest C tries to marry its own visual identity with that that's increasingly becoming common with all new-age Mercedes vehicles. The imposing three-pointed star on the grille has a bold chrome bar running in from either side. The front bumper is chunky and yet has flowing outlines with a chrome lower lip at the bottom. Even the eye-shaped head light units with LED lights and a dash for DRLs are quite smart, during the day and especially at night.

As mentioned in the first-drive review itself, the latest C-Class has been stretched and is wider than ever before but unlike the top diesel variant, the C 200 sits on smaller 17-inch five-spoke alloy wheels. 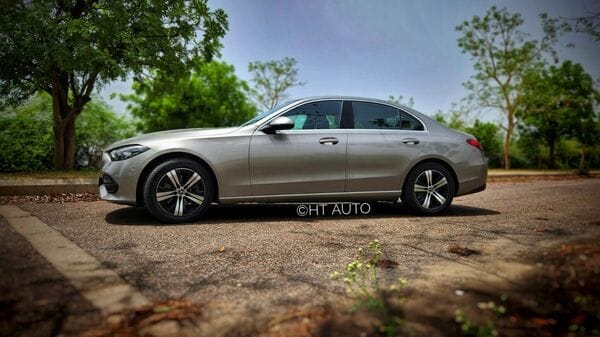 But for a sedan that draws inspiration from the S-Class, the C-Class is indeed at its best from the rear and that's because of a fluid and simple design language that inspires without trying to. The only drawback though is when one opens the boot to find a spare wheel which considerably reduces the already tight cargo space of 455 litres. For reference, that's less than what one gets in the Honda City (506 litres), Hyundai Verna (480 litres) and Maruti Suzuki Ciaz (510 litres). 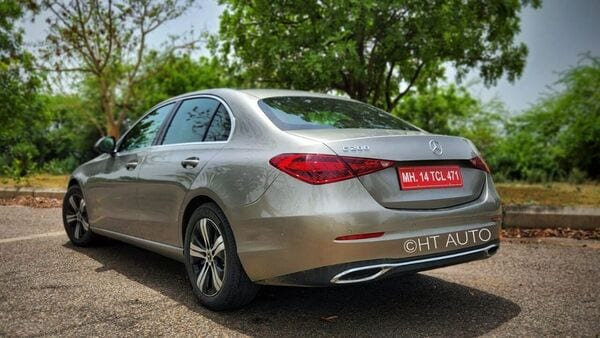 The ground clearance on the latest C-Class has gone up but by a marginal 7 mm. (HT Auto/Sabyasachi Dasgupta)

Your suitcases may be packed tightly but you are more than well taken care of inside the luxurious opulence of the new C-Class. Don't get us wrong - the C-Class still isn't the most spacious of sedans despite now being stretched further. The rear seats are best for just two and because the car has a slightly low profile, getting in and out is a tad tedious. But it is the attention to detail that is otherwise associated with certain Japanese and Scandinavian luxury brands that Mercedes plans well, really well.

An 11.9-inch vertically-oriented infotainment screen - and we won't make any reference to Scandinavian brands here - is the crown of the cabin and is packed to the brim with cutting-edge technology features. We have covered most of these in our review of the C 300d but just for a quick recap, there's support for wireless Apple CarPlay and Android Auto, voice control smart features, control through Mercedes Me mobile application, fingerprint authentication, 3D navigation and more.

There is also an all-digital 12.3-inch drive display with multiple themes. 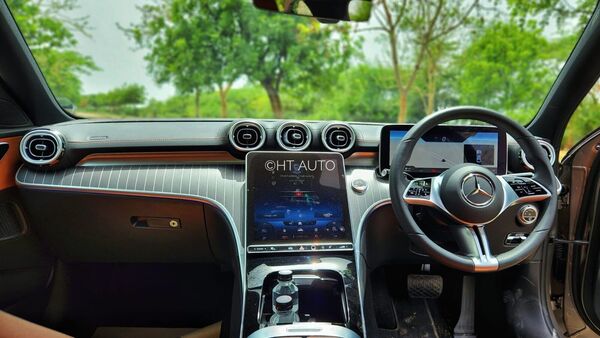 The quality of materials is top notch but this really should not even be mentioned because it can be taken for granted. The upholstery itself is offered in three colour option - Sienna Brown, Black and Macchiato Beige. As previously mentioned, the C 300d does not get the Macchiato Beige but instead has a two-tone Sienna Brown/Black colour palette, apart from all black hues. 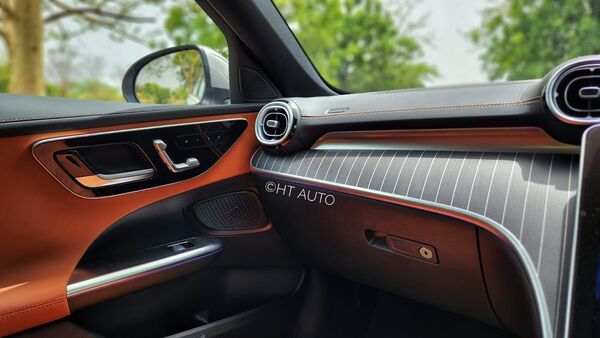 Another thing of note here is that the C 200 and C 250D gets fewer speakers and come minus the 3D sound customization function that is available on the C 300D.

If it is a dominant drive that you are after, there is absolutely no doubt that it is the C 300D that ought to be the variant of choice. There's 265 hp and a delicious 550 Nm of torque on offer that kept us hooked around the bends of the hilly roads around Mussoorie. There was more than enough indication that give it a straight road and the C-Class would fire forward with focus. The C-Class benefits from a planted drive trait which helps it stay grounded even when being pushed forward. (HT Auto/Sabyasachi Dasgupta)

But while the 1993 cc engine sure is a delight, the 1496 cc petrol motor is no straggler. More refined, but obviously, the four-cylinder motor is meant for relaxed drives through serene locations. But even through the bustling mid-summer roads of Delhi, there was plenty of character on offer. While it is true that throttle inputs would have been better received by a 2.0-litre motor, the nine-speed gearbox - common across all variants of the C-Class - ticked the numbers quite eagerly to bring down a faint feel of hesitation to pounce ahead. One suggestion? Test drive the petrol variant before the diesel because vice-versa may make you slightly biased against the former.

As for the ride quality, it remains quite impressive with the C-Class gliding over speedbreakers with superb ease. Also note that the C 200 has a slightly better ground clearance which means the underbelly contact problem we mentioned while driving the C 300d in Mussoorie would be far less of a concern here.

The 2022 Mercedes-Benz C-Class isn't an update for the sake of an update. This much is quite certain regardless of which variant you choose to focus your attention on. In terms of looks, the C-Class does go closer to the S but in terms of sheer features, it is remarkably loaded. For a sedan that is as likely to be driven as be driven around in, it is a great option.

Rear-seat space and limited boot space are not exactly ideal while the starting price tag of ₹55 lakh does make it costlier than before and more expensive than rivals like the BMW 3 Series and Audi A4. What you do get, however, is a car that means business and a sedan that pushes the envelope when it comes to technology on offer.