The Mercedes C-Class sedan, often referred to as the Baby S,  claims to pack in a wide range of updates to up the luxury quotient. Read our full first-drive review to find out more.
By : Shubhodeep Chakravarty
| Updated on: 09 May 2022, 12:41 PM 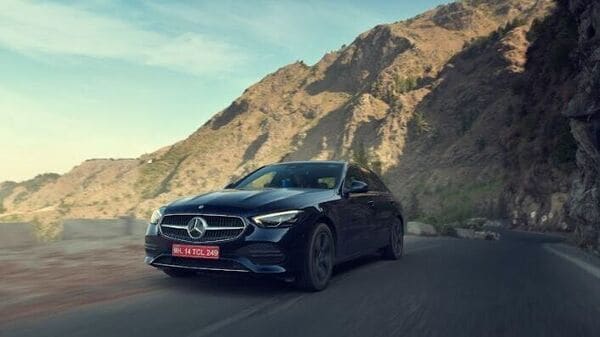 The latest Mercedes C-Class promises a plush and well-equipped cabin with stylish looks on the outside to further improve its overall appeal.

Sedans aren't just surviving in the luxury car space in India but are in fact thriving. A large credit for this goes to competing brands in this space that have been giving periodic updates to their respective offerings, often equipping them with more power, stylish visual updates and a truckload of features inside. Little wonder then that for Mercedes-Benz India, nearly 48% of all sales come from its sedan lineup. And wow, what a lineup.

From the A-Class Limousine at the one end of the spectrum to the S-Class Maybach on the other, there is a wide gamut of options but one that tries the most to play the balancing act between opulence and relative affordability is the Mercedes-Benz C-Class. Sitting above the A-Class Limousine launched early 2021, the C-Class is also often referred to as the Baby S and this is perhaps truer now than ever before with the 2022 Mercedes C-Class claiming to pack in a wide range of updates to up the luxury quotient it has on offer while remaining true to its sporty drive traits. 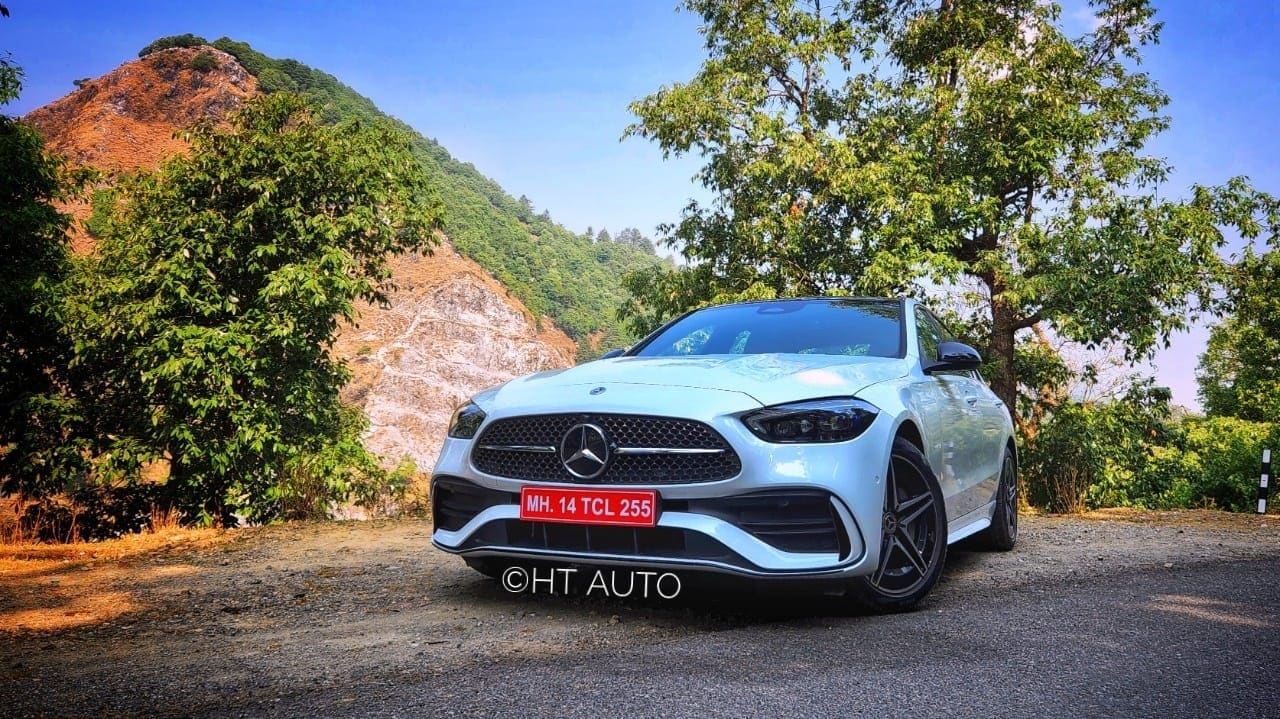 The 2022 C-Class looks quite appealing in each of the three variants but it is the C 300d that is still more than likely to get maximum eyeballs.

We got a chance to drive the latest C-Class around the scenic hills of Mussoorie, Dhanaulti and Kanatal, and much like the breath of fresh, crisp and cool air on the Uttarakhand hills, the newest from Mercedes was quite the refreshing delight.

The latest Mercedes-Benz C-Class is coming in with three variants on offer. There is the C 200, the C 220d and the top-of-the-line C 300d with AMG line styling. The C 300d features three powerful LEDs in each of the headlamps that enhances the illumination far better than ever before.

At a time when many key players in the market are ignoring diesel engines, Mercedes has persisted with it and this is in line with what the company says is the belief that customers should always have a choice and the final say. In the case of the C-Class, we're glad because ours was the variant-topping C 300d review unit.

The C-Class has always had sporty design cues on the outside but take what it had in the preceding model and multiply it to the tune of 300 and welcome the latest C-Class 300d. The AMG line styling gives the sedan the guaranteed ability to attract second looks of admiration courtesy its star-like treatment on the front grille, all around the typically imposing Mercedes logo. The bonnet is more pronounced now but the sleek LED headlight units with integrated LED DRLs continue to lend the face a sporty appeal. The digital lights make use of 1.3 million pixels for optimized illumination depending on the prevailing situation - time of day, weather, terrain, etc. 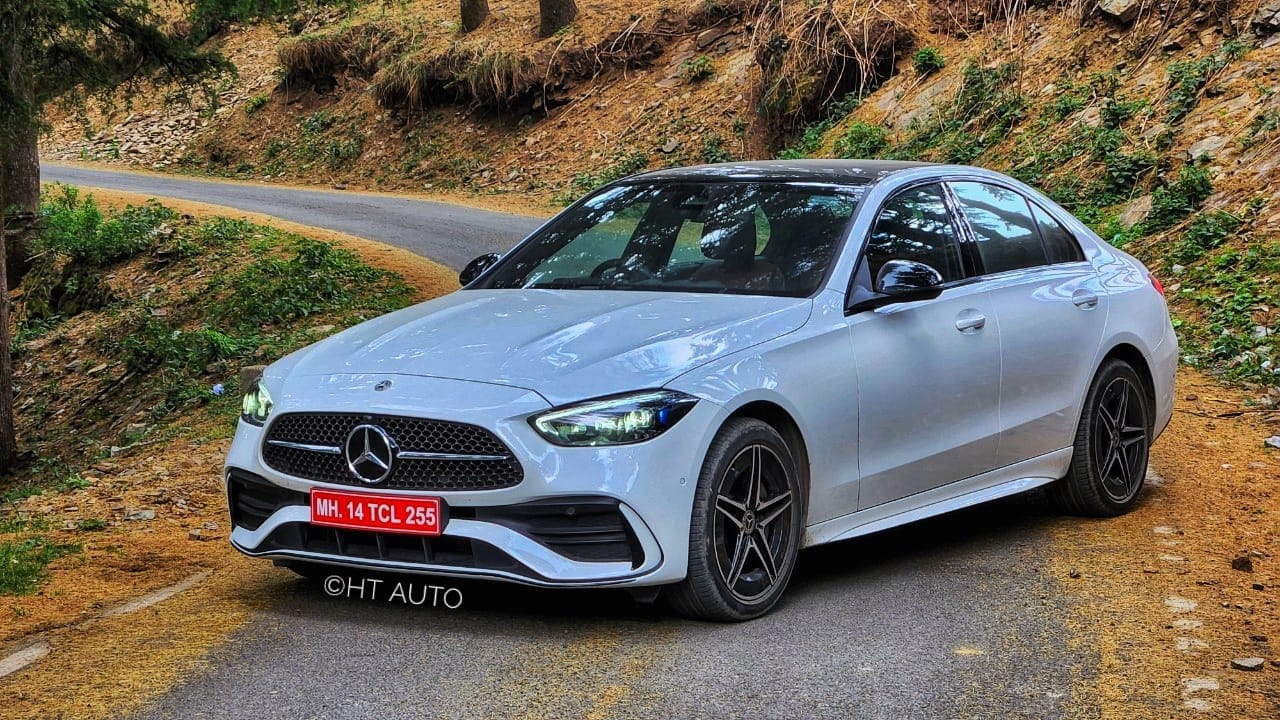 The C 300d stands on 18-inch AMG five-spoke alloy wheels, an inch larger than the ones on the other two variants. There is also a prominent character line on the side body while there is a slight bump up in ground clearance. The rear profile of the car is highlighted by artistic LED tail light units and a comparatively high rear bumper. 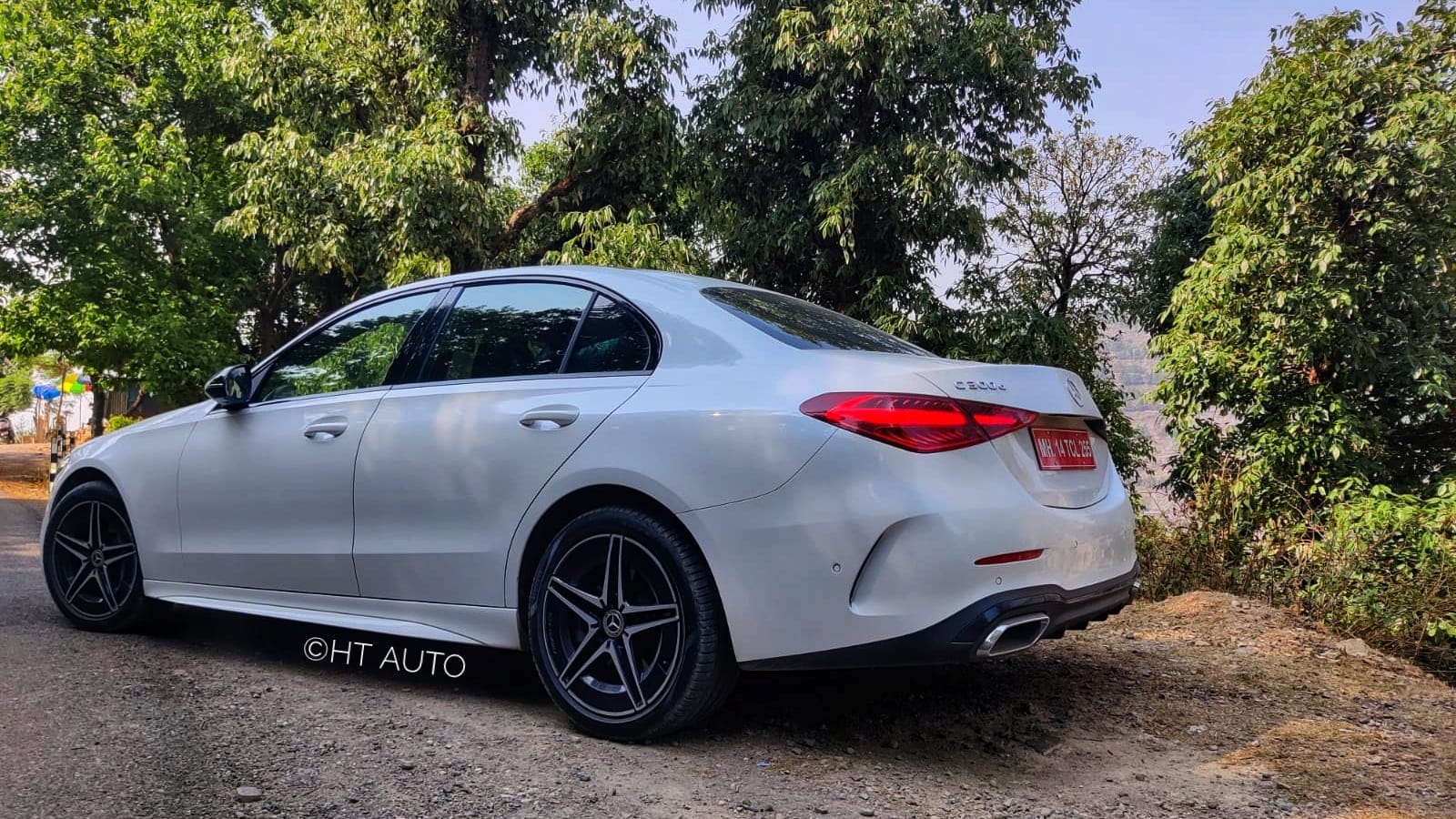 Sitting low to the ground, the C-Class looks quite sporty from the side angle.

The biggest highlight on the latest C-Class comes from within and the sheer quality of the cabin, along with the feature list takes this car impressively close to the S-Class, the flagship sedan from Mercedes.

While the S-Class is obviously the pinnacle of opulence from Mercedes and the C-Class sits two segments below it, the C still manages to showcase the brand's focus on lending its products with an even higher level of refinement. 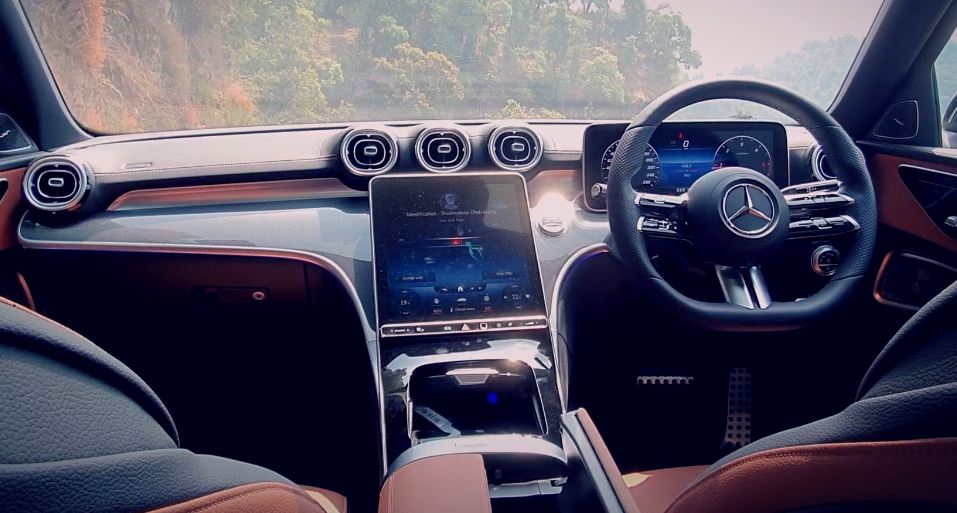 A look at the dashboard layout inside the C-Class from Mercedes.

The C 300d is a perfect example in point. While the dashboard layout, the 11.9-inch infotainment screen in the middle, the center console section and the all-digital driver display are absolutely top notch, even the quality of stitching and seat comfort is what you would expect from Mercedes, regardless of which segment within the brand you may be going in for.

As mentioned earlier, the C 300d takes the opulence further still. It comes with a flat-bottomed steering wheel in Nappa leather, a Burmester Surround Sound system with personalization, metal weave trim on the dashboard and the two-tone upholstery colour which is extremely inviting. The front section of the car is designed to perfection with the main infotainment screen offering a plethora of customization options and packing in the latest MBUX system. This allows biometric authentication, natural voice recognition, wireless phone integration, enhanced map with 3D view and OTA updates. At a quick glance, it may seem like this is the S and not the C, and well, C-Class ought to take that as a massive compliment.

But where the C-Class continues to lag is space at the rear. The wheelbase may have been increased slightly but the sedan still offers little room to stretch out at the back. Not that we expected S-Class-like space but the cabin does still feel rather restrictive. The tall floor hump and the center console jutting back means that the passenger in the middle would feel hemmed in even more than those on either side. The massive sunroof, however, does help the cause even if the low seating position doesn't because getting in and out is a bit of chore as well. 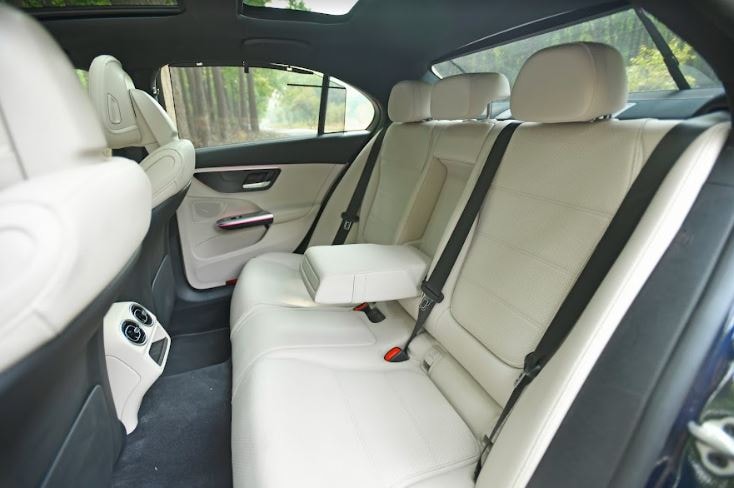 The dimensions and proportions of the C-Class is similar across all its variants.

The latest C-Class in the 300d variant packs in a four-cylinder 2.0 litre diesel unit under the hood which produces 265 hp and offers 550 Nm of torque. Start the C and it is easy to see just why you ought to be behind the steering and not anywhere else in this car. This sedan is just so much fun. 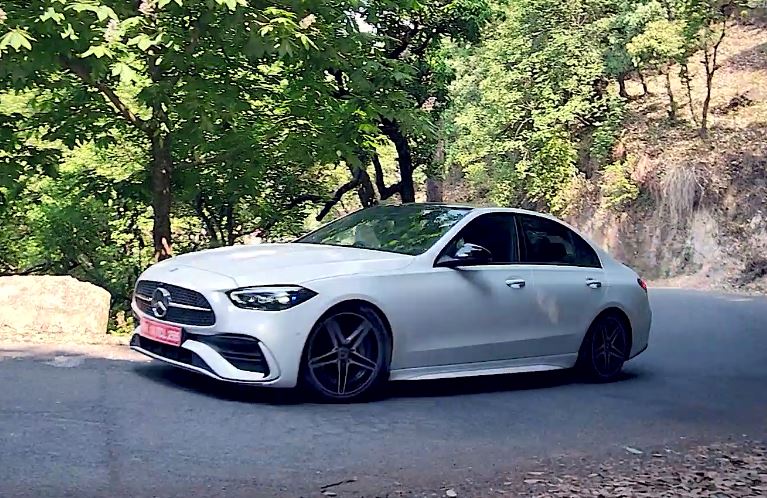 The eager diesel unit inside the C 300d makes this car one of the most fun to push in its segment.

Around the winding hilly roads, we didn't floor the pedal as much as we wanted to but it was still amply clear that this here is a sedan that is meant to be driven. The 9G TRONIC transmission unit is typically precise and ticks numbers effortlessly whether building speeds uphill or slowing down around downhill bends. The steering set-up confidently supports as the car plays its way around the mountains and the precision with which the sedan continues to handle, continues to impress. 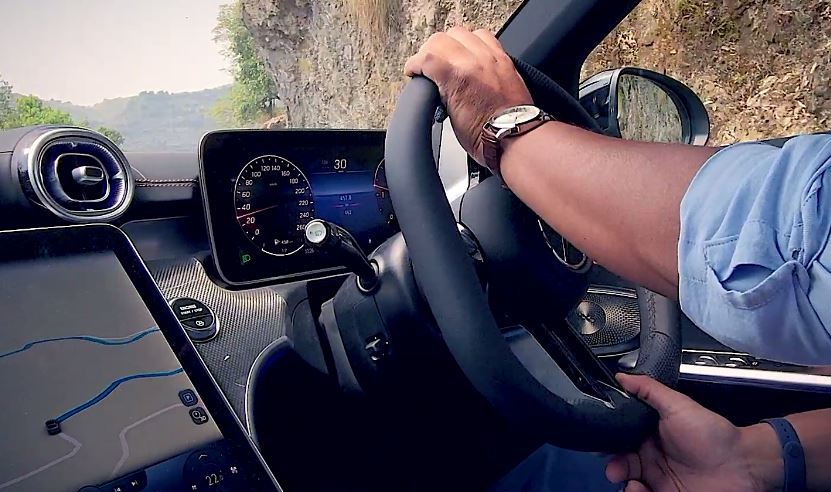 The C-Class steering set up makes this sedan not just mighty capable around narrow hilly roads but mighty fun as well.

Making its debut in the C-Class is a 48V hybrid system which adds to the power output of the vehicle but its primary duty is to switch to full electric for a short distance in low-speed crawling to enhance mileage figures and provide a smoother drive experience.

The C-Class still has a slightly stiff suspension though but the major worry is its ground clearance. The figure has marginally improved but the 300d still scraped over some unplanned speed breakers to have us mighty worried. So while we had a whole lot of fun letting the car gun forward as much the conditions allowed, an eye was always peeled for road abrasions ahead.

The 2022 Mercedes-Benz C-Class is a major step forward from the preceding model and the 300d deserves to be at the variant list. Extremely sporty to just stare at and even more when being driven, this car backs itself with an impressive list of features and a very upmarket cabin.

Rear-seat space and ground clearance, however, remain its two Achilles heels and a more focused look here would have helped the C-Class achieve a perfect score. Nonetheless, the C-Class can still be a very, very viable option to either enter the luxury space for the first time or a worthy addition of a garage already laced with premium vehicles.