Maruti Suzuki's share among top 10 cars sold in India in June has gone down to just six after Tata Punch and Hyundai Venue pushed Maruti's Brezza and Eeco out of the list.
By : HT Auto Desk
| Updated on: 07 Jul 2022, 13:41 PM 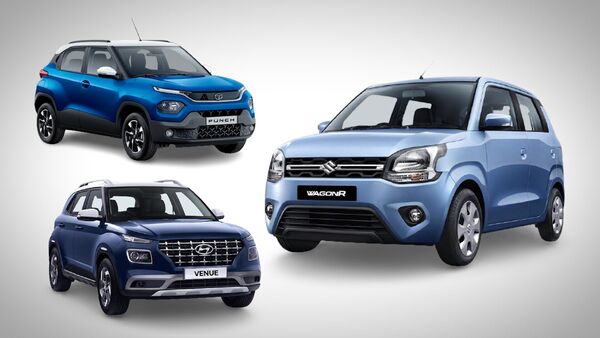 Maruti WagonR continues to lead the list of top 10 cars sold in India. Hyundai Venue and Tata Punch have made their return to the list after a few months.

As Maruti Suzuki continues lead carmakers in India in terms of sales, Tata Motors and Hyundai Motor are locked in a tight race to be the second largest carmaker in the country. It is also evident in the list of top 10 cars sold in India in June, where Tata and Hyundai managed to reduce Maruti's share to just six. While Maruti's dominance continues on the list of top 10 cars sold last month, the small and medium SUVs from Tata and Hyundai, which include the likes of Nexon, Punch, Creta and Venue, helped the duo to put up a challenge against the top carmaker.

Here is a look at the top 10 cars sold in India in June:

Maruti's popular hatchback WagonR remains firmly placed as the number one choice for Indian customers in the past few months consistently. With 19,190 units sold last month, WagonR sales have eclipsed the previous month's tally of 16,814 units. In fact, the sales of WagonR has now almost matched that of June last when the carmaker sold 19,447 units.

Last month, the Swift hatchback managed to topple Tata Nexon from number two position after returning to the top-10 fold in May after some time. Maruti sold 16,213 units last month. It is up by nearly 2,000 units from May this year. However, in June last year, Maruti sold more Swifts than last month. Despite Covid challenges, Maruti had sold 17,227 units during the same month last year.

The new generation Baleno has also managed to puhs Tata Nexon down the order with 16,103 units sold in June. Baleno, now at number three, has seen significant rise in sales figure compared to 13,970 units sold in May. Even when compared to the sales figures in June last year, Maruti has sold more than 1,400 units last month. Earlier this yeaer, Maruti had launched the new Baleno packed with a host of new features and tech upgrades.

The popular sub-compact SUV from the Tata Motors stable remains India's number one SUV in June. However, its sales has declined marginally compared to May this year. Last month, Tata sold 14,295 units of Nexon, down from 14,614 units in May. However, compared to June last year when Tata sold only 8,033 units, the sale of Nexon has gone up significantly.

Due for a facelift later this year, the existing models of Maruti Alto remains a strong favourite among buyers. Maruti sold as many Altos as Hyundai Creta last month. The sales has also gone up by more than 850 units since May this year. In June last year, Maruti had sold 12,513 units of Alto, signifying the small hatchbacks stable performance over the years.

Dzire continues to be the only sub-compact sedan to feature in the list of top 10 cars sold in India every month. Maruti sold 12,597 units of Dzire last moth, which is even higher than 11,603 units sold in May. Long due for a facelift, the Dzire remains one of the most consistent performers in the Maruti stable. In June last year, Maruti Dzire found 12,639 homes across India.

The new generation Ertiga seems to be bogged down with long waiting period since its launch in April. Its sales has gone down considerably since the launch. In June, Maruti sold 10,423 units of Ertiga, down from 12,226 units in the previous month and 14,889 units in the launch month this year.

Tata Motors had a second entrant in the list last month with the Punch SUV finding 10,414 homes last month. After an initial burst, Punch had lost out a bit of steam in recent months. Punch was launched late last year, and. issoon going to find a new rival in Citroen C3, scheduled to launch later this month.