Tata Nexon remains the top choice for Indian car buyers when it comes to SUVs. Hyundai Creta leads the race in the compact SUV segment.
By : HT Auto Desk
| Updated on: 07 Jul 2022, 16:33 PM 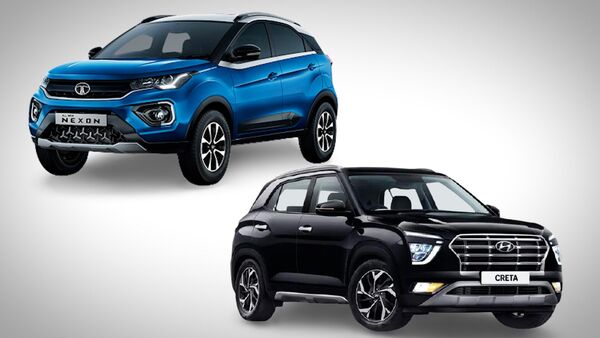 Tata Nexon (top) and Hyundai Creta (bottom) remain the leaders in the sub-compact and compact SUV segment in India in June.

With a flurry of SUVs being launched or heading for Indian roads increasing with every day, the segment in India has seen consistent rise in recent times and is one of the most popular body types preferred by Indian buyers. As rivalry intensifies, carmakers like Tata Motors and Hyundai Motor is currently leading the segment with their flagship products. According to the sales data for last month, both carmakers had at least two models each among the top 5 SUVs sold in India. Kia India is placed third among SUV manufacturers in the country in terms of sales.

Here is a look at the top 5 SUVs sold in India in June:

Tata Motor's sub-compact SUV, which also comes in an electric avatar, has been leading the SUV race in India for the past few months. Nexon SUV found 14,295 homes in June across India. In the previous month, Tata had sold 14,614 units of Nexon. The SUV is likely to face more intense competition in coming days with the recent launches of the new generation Maruti Suzuki Brezza and Hyundai Venue. Toyota Motor too is likely to drive in the new generation Urban Cruiser SUV soon.

Creta has been Hyundai Motor's best-selling model over the past couple of years. Since the launch of the new generation model during the Auto Expo in 2020, Creta's sales has grown leaps and bounds and has eclipsed the sale of the older generation model. In June, Hyundai sold 13,790 units of the SUV. Creta's popularity remains intact despite its long waiting period due to high demand. However, with the upcoming launches of Toyota Urban Cruiser Hyryder and Maruti Vitara compact SUVs, Creta could be in for some tough road ahead.

The smallest SUV from the Tata Motors stable is no pushover. The Punch SUV has proved its mettle in the initial months since launch, and has picked up sales once again. Tata sold 10,414 units of Punch SUV last month. The SUV is likely to get a new rival in C3 when Citroen launches the SUV-styled hatchback on July 20.

Hyundai Motor has launched the new generation Venue in an attempt to strengthen its SUV portfolio in the sub-compact category. Packed with a host of new features, the new Venue is expected to boost its sales in coming days. However, the older model did not fair too bad in terms of sales in June. Hyundai sold 10,321 units of Venue last month. Like Nexon, the new Venue will renew rivalry with the newly launched Maruti Suzuki Brezza.

The fifth SUV on the list is again from a Korean carmaker. Kia's flagship compact SUV Seltos continues to be a strong favourite among buyers in the segment. Kia sold 8,388 units of Seltos last month, compared to 8,549 units during the same month last year.