Tata Punch promises to punch above its weight with capabilities of bigger SUVs despite being smaller in size, and offer a budget buy for those looking for an affordable car.
By : HT Auto Desk
| Written By : Sabyasachi Dasgupta
| Updated on: 14 Oct 2021, 09:17 AM 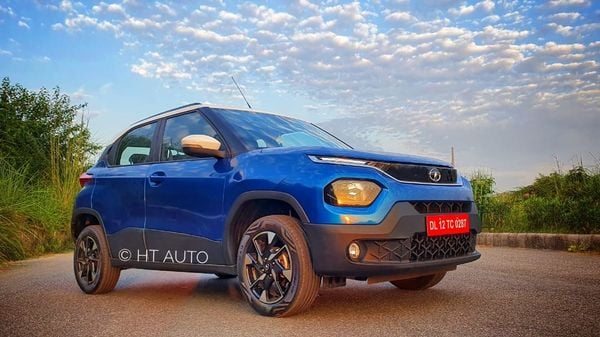 Tata Punch, to launch on October 18, is expected to be priced from ₹5 lakh (ex-showroom).

Tata Punch SUV is all set to be launched next week. Tata Motors has confirmed that the price of the 2021 Punch SUV will be announced on October 18. The Punch SUV was unveiled earlier this month, and the bookings have been opened at ₹21,000. The deliveries are expected begin post official launch.

Tata Punch promises to be an affordable option for budget buyers looking for smaller cars with SUVish stance. It has already been put to test by journalists to check its capabilities. During the Punch review, HT Auto found out that the SUV offers a high riding position like an SUV, stable on road performance as well as off the beaten tracks where driving a regular car is challenge. (Check our full review here)

Being from the Tata stable, Punch is also likely to score very high on safety parameters. There are reports already that the Punch has passed the Global NCAP crash tests in flying colours, though official reports are expected to come out closer to the launch date.

As far as features are concerned, Tata Punch has been packed with most of the creature comforts that one should expect from a car of this size. Though it does not have a sunroof or driver's armrest, Punch offers decent space inside and features to keep one engaged.

Tata Punch will be offered in seven colours, including dual-tone colour options. The front grille is flanked by head lights with LED DRLs. It also gets 16-inch alloy wheels.

Based on ALFA-ARC architecture, Tata Punch promises to tackle broken roads with ease, some times even when there is no road. The SUV gets 187 mm ground clearance, 20.3 degree approach angle, 22.2 degree ramp over angle (unladen), Traction Control Mode and has 370 mm water-wading capability. Punch also gets a feature called Brake Sway Control, a first for a Tata car.

Under the hood, Punch SUV gets a 1.2 Revotron engine with Dynapro Technology churning out 86 PS of power and 113 Nm of torque. The engine is mated to a five-speed manual gearbox and an option to pick an augmented AMT with Altitude Terrain mapping. It can sprint from zero to 60 kmph in 6.5 seconds.

When launched, Tata Punch is likely to rival the likes of Maruti Suzuki Ignis. However, if priced aggressively, it may make some of the budget sub-compact SUVs like Nissan Magnite and Renault Kiger a run for their money too.