Maruti Suzuki has recorded a marginal rise in monthly domestic sales compared to February this year. The carmaker expects the numbers to increase with a host of new launches in coming days.
By : HT Auto Desk
| Updated on: 01 Apr 2022, 03:50 PM 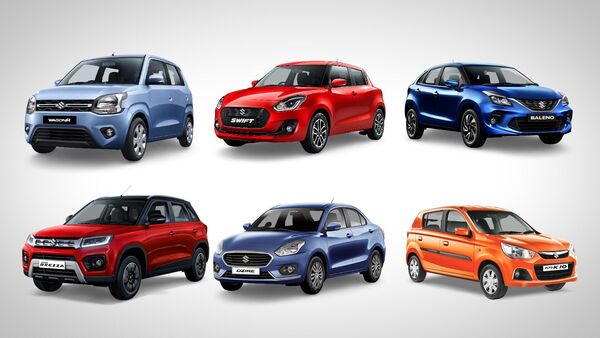 Maruti Suzuki has sold 137,658 units in March in the Indian markets, clocking a marginal rise in monthly sales figures. India's largest carmaker continues to record to new highs in exports. With 26,496 vehicles in March, Maruti registered its highest ever export. Maruti ended the financial year with a total sales of 1,652,653 units with a growth of 13.4% over the last financial year. Total sales includes domestic sales of 1,365,370 units, sales to other OEM of 48,907 units and highest ever exports of 238,376 units.

Maruti Suzuki, like most other carmakers in India, has seen a slide in sales due to the ongoing supply chain issues and chip crisis. The carmaker issued a statement today saying, “The shortage of electronic components had some impact on the production of vehicles in FY 2021-22. The Company took all possible measures to minimise the impact. As the supply situation of electronic components continues to be unpredictable, it might have some impact on the production volume in FY 2022-23 as well."

Maruti's smaller cars, which include the likes of Alto, Swift, WagonR, Baleno Dzire, continue to attract large number of customers and form the base of Maruti's sales in India. Together, nine such cars contributed 97,805 units to the overall sales volumes last month despite a marginal drop compared to March last year.

Maruti Suzuki is on an overdrive of new launches this year. The carmaker has already launched the new Celerio and its CNG version, WagonR and the 2022 Baleno recently. It is also expected to launch the facelift versions of Ertiga and XL6 MPVs later this month. According to reports, Maruti Suzuki will also launch the facelift version of the Vitara Brezza SUV. Later this year, it will also drive in a new compact SUV to take on rivals like Hyundai Creta and Kia Seltos.