Besides Mahindra Scorpio-N and Toyota Hyryder SUVs, Maruti Suzuki will also drive in the facelift version of the Vitara Brezza sub-compact SUV later this month.
By : HT Auto Desk
| Updated on: 27 Jun 2022, 12:31 PM 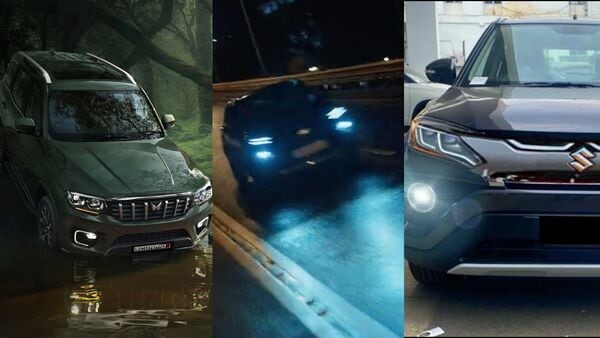 Mahindra Scorpio-N will debut on June 27, while Maruti Suzuki Vitara Brezza facelift will be launched on June 30. Toyota will introduce the Hyryder SUV on July 1.

India will see three more SUVs join the list of choices by next weekend. By Friday, Mahindra and Mahindra will launch Scorpio-N, its facelift version of Scorpio SUV while Maruti Suzuki will drive in the facelift version of the Vitara Brezza sub-compact SUV. Toyota Motor will also debut a brand new model called the Hyryder, which will compete in the compact SUV segment dominated by the likes of Hyundai Creta and Kia Seltos SUVs. Here is a quick look at what to expect from each of these three SUVs heading India's way.

Mahindra and Mahindra will launch the 2022 Scorpio-N SUV on June 27. The carmaker will position the new SUV above the existing model which will continue to be sold as Scorpio Classic in India. From its looks to its features and performance, the new generation Scorpio SUV will come with a host of changes.

The three-row SUV will come with a new set of LED projector headlight unit, dynamic turn indicators, LED taillights, a redesigned grille with the new Mahindra logo as some of the key updates on the outside. On the inside, the Scorpio-N will offer premium features such as 3D sound system from Sony, a digital touchscreen infotainment screen powered by AdrenoX, dual-tone black and brown interior theme, semi-digital driver display, automatic climate control among others.

The new Scorpio will be available in both 2WD and 4WD options. The SUV will have separate drive modes. Under the hood, the Scorpio-N will be offered with both petrol and diesel engines. These include the usual 2.2-litre diesel engine and a 2.0-litre turbocharged petrol unit. The 2.0-litre turbocharged petrol engine, which is also being used in the flagship SUVs like XUV700, is likely to generate 168 hp of power. This will be nearly 40 hp more than what the standard 2.2-litre diesel engine can generate. The engines will come mated to either a 6-speed manual or a 6-speed torque converter automatic transmission unit.

According to Maruti Suzuki, the 2022 Brezza will come with features such as 360 degree camera, Head up Display, a 9-inch digital touchscreen display, more than 40 connected car features as well as a sunroof, which is a first for any Maruti car.

Besides the changes inside, the new Maruti Brezza will also get design updates on the outside with a slimmer grille with less chrome, new set of LED headlights and more.

Under the hood, expect the Brezza facelift SUV to be powered by the new 1.5-litre K15C series petrol engine that also powers the likes of Ertiga and XL6. The engine will come mated to a 5-speed manual as well as the new 6-speed torque converter automatic transmission gearbox.

Toyota Motor is going to be the latest entrant in the compact SUV segment in India with the Hyryder SUV. The new SUV, which will be offered with self-charging hybrid electric motor, will be officially unveiled on July 1. The Hyryder SUV is the same model that Toyota and Suzuki has been jointly developing for the Indian market. Maruti Suzuki will also have its version of the Hyryder later this year, which will phase out S-Cross and renew rivalry in a segment dominated by Korean carmakers.

Not much detail about the Toyota Hyryder is public yet. A recent teaser video shows that the SUV will get a slim grille with LED headlight units, LED taillights among other features. Expect Toyota to source Suzuki's 1.5-litre petrol engine to power the Hyryder SUV. The engine is likely to come mated to both manual and automatic transmission units.

So far, the Japanese carmaker has been known for its big and sturdy models like Fortuner and Innova Crysta. The Urban Cruiser sub-compact SUV, which basically is the rebadged version of the Brezza, has not been too successful.