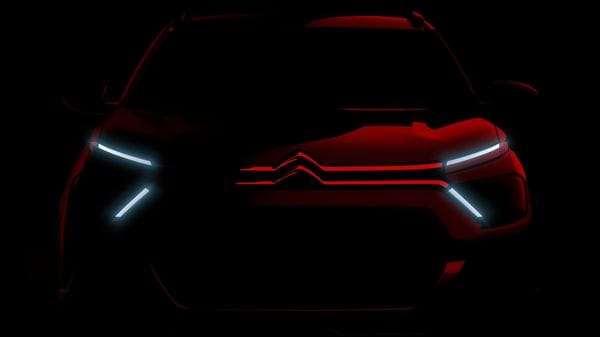 Citroen India has teased the upcoming C3 SUV, which is likely to rival Brezza, Venue and Sonet among others, ahead of its official debut on September 16.

Citroen has confirmed that its upcoming subcompact SUV, codenamed CC21, will make its global debut on September 16. The carmaker took to social media to make the announcement, along with a teaser image of the SUV.

Citroen called the upcoming SUV ‘Made In India for Indians’. According to reports, the small Citroen SUV, likely to be called C3 in most of the markets, will launch in the Asian countries first and in Latin America next year.

The teaser image shows the traditional logo above the grille. The bonnet of the C3 is likely to get the similar butterfly-pattern on the bonnet like seen on the C5 Aircross SUV. The LED DRLs also appear quite futuristic in the teaser image, and looks slightly different from the ones seen on the French auto giant's first offering in India.

Citroen C3, when it arrives in India, will be the French auto giant's second offering in the country after it launched the C5 Aircross SUV last year. The 2022 C3 SUV will take on rivals like Maruti Suzuki Vitara Brezza, Hyundai Venue, Kia Sonet, Nissan Magnite, Renault Kiger, Mahindra XUV300 among others.

The Citroen C3, which is codenamed CC21, is going to be the first SUV in India to come with a flex-fuel engine that is compatible with ethanol-based fuel. According to reports, Citroen is going to fit the C3 SUV with flex-fuel engine with a capacity of 1.2-litre with turbocharge, mated to either a 5-speed manual or automatic gearbox. The engine is capable of generating maximum power of 130 bhp. The SUV may also get the option of a 1.6-litre naturally aspirated engine as well.

Made In India for Indians.

Citroen will use its new Common Modular Platform (CMP) for the C3 SUV, which aims to keep the cost of the vehicle down by as much as possible and make it more affordable in markets like India where SUVs under the four-metre category have seen one of the biggest rise in passenger vehicle demand.