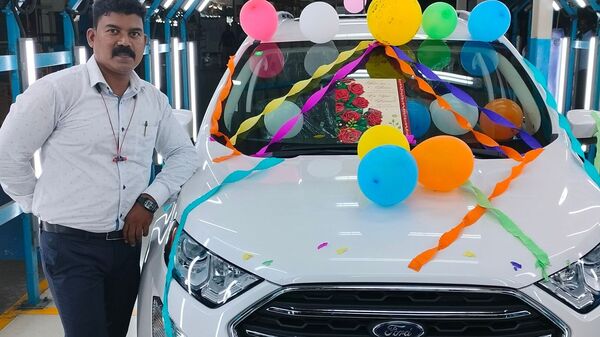 Ford India has rolled out its last car from Chennai plant. One of the automaker's employees has posted an image on LinkedIn, showing the car, a white Ford EcoSport, meant for overseas market. This comes after Ford already announced its exit from the Indian market previously. The automaker stopped production at its Sanand facility in October last year, with the Ford Freestyle as the last model rolled out from the facility. Since then only the Chennai facility was operational, making cars only for the overseas markets.

(Also Read: Mercedes-Benz EQS to launch on August 24, AMG variant to be first to arrive)

Ford has no plans to resume its operation in India. It has already sold its Sanand factory to Tata Motors. The Chennai facility too is expected to be sold. However, Ford hasn't confirm anything about this. Ola Electric among other auto brands contending for buying this facility.

Ford's decision to exit the Indian market was quite dramatic. In September 2021, the automaker announced its plans to shut down factories in India. It cited sub-optimal returns as the reason behind its exit from the Indian market. It said, the automaker would continue to make cars for the overseas markets in Indian plants and bring some high-end CBU models to the country including the Mustang Mach-E. Then in February this year, it started reconsidering the decision and made a surprise re-entry into India. It also won PLI benefits under the PLI scheme for electric vehicles. Then in May this year, it again pulled out of the India factories. However, Ford India announced that it will continue to offer service and spare parts support to the existing customers.