Audi e-tron EVs will officially launch in the country on July 22 and Audi is also banking on options in two different body styles to grab a whole lot of attention.
By : HT Auto Desk
| Updated on: 12 Jul 2021, 12:54 PM 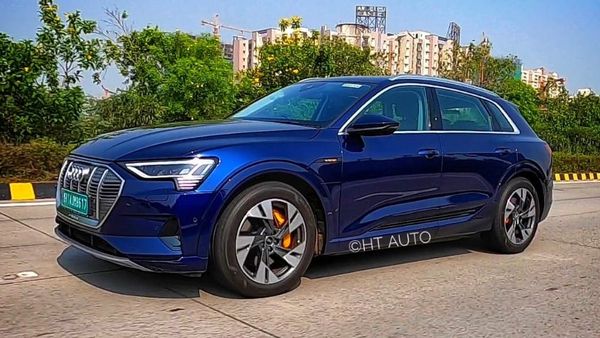 Audi e-tron is readying itself for a battle in the niche Indian luxury EV space.

Audi e-tron and e-tron Sportback are the latest electric vehicles all set to be launched in the Indian car market. The Audi e-tron vehicles will be launched on July 22 and will take on Mercedes-Benz EQC and Jaguar I-Pace. And while the competition is expected to be intense in a rather niche segment, Audi is promising multiple variants as it seeks to offer a wide range within the luxury EV segment.

Prospective customers will be able to choose from two body styles with the e-tron being the more conventional while the e-tron Sportback having a swept-back design highlight. For those who may choose the former, there is e-tron 50 and e-tron 55 that would be on offer from the launch date onwards. Audi India is backing the strategy of giving options to work in its favour as it gets set for its debut in the EV field of play here. "We believe in India’s long-term goal of electric mobility and at the same time in giving an array of choice to our customers. It is with this belief that we have decided to launch the entire range of the Audi e-tron SUV in the form of two variants, along with the Audi e-tron Sportback 55," said Balbir Singh Dhillon, Audi India Head, in a press statement issued by the company. "Between this trio, we aim to quickly get India’s most discerning first movers and early adopters plugged into our premium electric SUVs and subsequently usher in the new era of electric luxury mobility in the country."

Audi will be the third luxury car maker in India to drive in an electric vehicle and much like its rivals, is using the CBU route to enter the fray. Bookings for e-tron 50, 55 as well as e-tron Sportback were opened earlier this month.