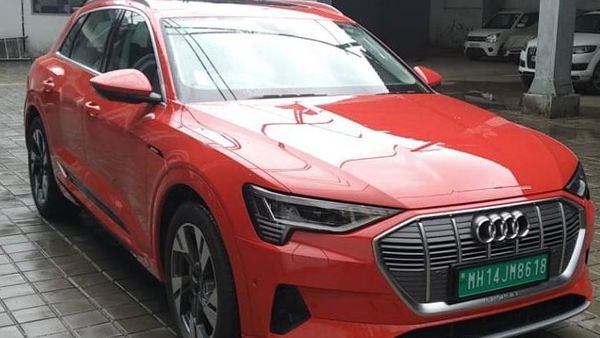 Audi e-tron models have started arriving at dealerships in the country.

Audi e-tron is the next big launch lined up by the German automaker in the Indian car market and the e-tron has already begun arriving at several showrooms here. The e-tron would be the first electric vehicle from Audi in India and will directly lock horns with the Mercedes-Benz EQC - launched late last year, and with Jaguar I-Pace which was launched earlier this year.

(Also Read: Luxury car market could recover quicker than others from pandemic woes in India)

Audi e-tron has been an eagerly awaited EV in the Indian luxury car space and there's good reason why. Audi has been teasing the e-tron here for some time now and it has managed to generate quite a lot of buzz. The e-tron has fared well in global markets with the Germans selling 17,641 units in the first half of 2020. The e-tron SUV was updated late last year and now boasts of a second on-board charger. Powering it is a 71.2 kWh battery pack and the e-tron can power to 100 kmph in just 6.8 seconds and maxes out at 190 kmph. The claimed per charge range of the vehicle is somewhere between 282 kilometres and 340 kilometres, depending on factors such as occupants, terrain, drive patterns - valid factors for any electric vehicle.

Inside, the e-tron gets a very futuristic-looking cabin with minimal physical switch and buttons, as found on the new-age ultra-luxury cars and SUVs. It makes use of two large touchscreen units tilted towards the driver. Other key interior elements on the battery-powered SUV include a multi-function steering wheel, four-zone climate control, ambient lighting, and a panoramic sunroof.