Bookings for the latest Lexus NX 350h is open.The refreshed Lexus SUV gets several design updates as well as an electric motor for hybrid credentials.
By : HT Auto Desk
| Updated on: 09 Mar 2022, 03:09 PM 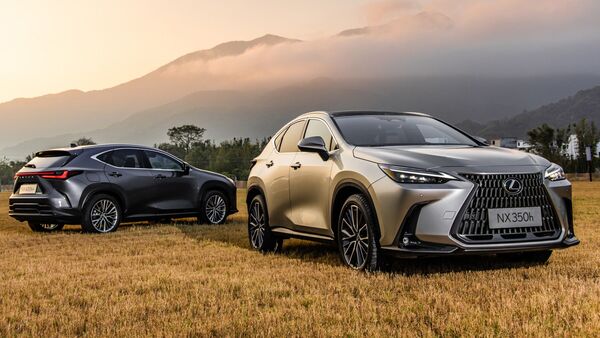 The SUV is powered by 2.5-litre four-cylinder naturally aspirated petrol engine and is paired to an electric motor even as Lexus underlines its commitment to a greener future and stated it wants to be carbon neutral by 2050 and will only have EVs in its global portfolio by the year 2025. The engine can generate an output of 192 hp. The combined output of the petrol and the hybrid unit is 244 hp in all-wheel-drive. The engine comes mated to a 6-step e-CVT transmission.

In its refreshed form, the Lexus NX 350h gets several exterior design updates on the outside and of course, the hybrid powertrain. Lexus says that the hybrid unit is self-charging without the worry to plug it in every time to recharge. It offers an electric-only range of around 55 kms.

The look of the 2022 Lexus NX 350h has been updated with several changes. These include a new set of integrated DRLs in the single-piece LED headlamps, new LED taillights which are connected by a light bar, and a U-type pattern for the spindle grille which has grown larger in size.

It is available in a variety of fresh NX colours, including Madder Red and Sonic Chrome. For colours exclusive to F Sport models, the palette includes White Nova and Heat Blue.

The interior of the SUV has been upgraded too. It now offers features like a larger 14-inch infotainment system, electric folding rear seats, a panoramic sunroof, and customisable ambient lighting among others. It also gets a 360-degree parking camera, Head-Up Display, wireless Apple CarPlay and Android Auto, wireless charging, 64 colour ambient lighting as well. The rear seats of the SUV also come with a folding feature to offer more space.

Speaking about the NX 350h SUV, Lexus India President Naveen Soni said that with the new 2022 model, the company is confident that it will set a new benchmark in the luxury market. “The all-new NX will come with class-leading innovations in driving dynamics, styling, safety, and much refined environment-friendly self-charging hybrid electric technology," he said.