Audi India has officially opened bookings for the upcoming 2022 Q7 SUV, which makes a comeback to India in new avatar. The seven-seater SUV is likely to be launched towards the end of this month.
By : HT Auto Desk
| Updated on: 11 Jan 2022, 11:29 AM 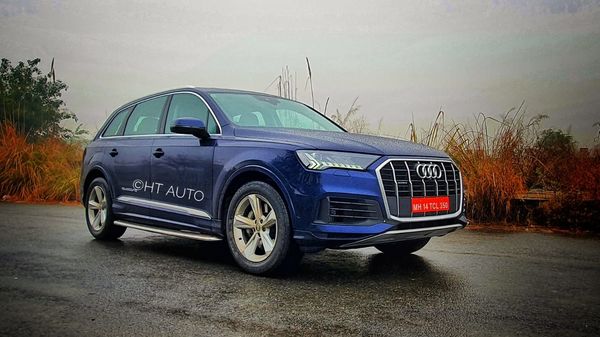 2022 Audi Q7 facelift SUV is expected to be launched by the end of this month. (Photo credit: Sabyasachi Dasgupta/HT Auto)

Audi has officially opened booking for its upcoming 2022 Q7 facelift SUV. The three-row luxury SUV is all set to make a comeback in India with a new engine at its heart towards the end of this month.

Audi has fixed the booking amount for the 2022 Q7 facelift at ₹5 lakh. The Q7 will be available in two trims - Premium Plus and Technology - when launched. The new Q7 will take on rivals like the BMW X7, Mercedes-Benz GLS, Volvo XC90, and the Land Rover Discovery.

The 2022 Q7 is currently being produced at the German carmaker's Aurangabad facility in Maharashtra. The SUV has already started to arrive at several dealerships across the country ahead of the launch later this month.

In its latest avatar, the facelift version of the Audi Q7 will come with several cosmetic updates on the outside as well as inside the cabin. There will be a redesigned front face in line with the latest Audi Q family range. It includes new signature daytime running lights, redesigned grille with a chrome frame adjoining Matrix LED headlamps. There is also a new bumper with larger air intakes as well as fresh set of alloy wheels. At the rear, the Q7 will come with tweaked LED tail lights with chrome trim.

The biggest and the most important change in the Q7 facelift SUV is under the hood. The SUV a new 3.0-litre V6 turbocharged petrol engine which will come mated to an eight-speed automatic transmission. This engine is like to produce 340 hp of maximum power and 500 Nm of peak torque. It can accelerate from zero to 100 kmph in less than six seconds and has a top speed of 250 kmph. The Q7 facelift will also come kitted with a standard Quattro all-wheel-drive system.