Home Auto Two Wheelers Vyrus Alyen, A Bike With A Ducati At Heart, Looks Straight Out Of A Sci Fi Movie

Vyrus Alyen, a bike with a Ducati at heart, looks straight out of a sci-fi movie

This futuristic superbike is made of carbon fibre and is capable of producing more than 200 hp of power.
By : Sabyasachi Dasgupta
| Updated on: 07 Apr 2020, 10:17 AM 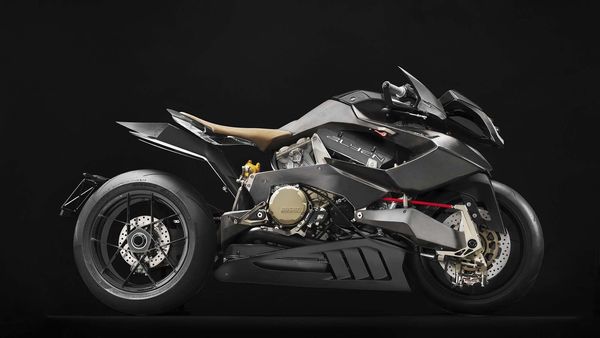 It comes from Italy. It has two wheels and a Ducati engine at heart capable of producing more than 200 hp of power. Meet the new Vyrus Alyen, the latest model to come out of the Italian superbike maker's stable based in Rimini.

The latest Vyrus superbike looks like it came from outer space, and wouldn’t look out of place in a science fiction movie. At its heart sits a Ducati Superquadro V-Twin engine that is mated to a six-speed gearbox, and can produce 205 hp of power at 10,500 rpm.

Vyrus Alyen comes built with double-beam magnesium chassis - baptised as Double Omega Design - in combination with a structure that embraces the 1285 cc Superquadro engine used by Ducati in its two-cylinder Panigale. The body and the wheels of the Vyrus Alyen are made of carbon fibre.

Instead of a conventional fork, the Vyrus Alyen uses hub-centre steering, a suspension configuration called Hydraulic Wired Steering System. Ascanio Rodorigo, the project leader of Vyrus, developed the system for the first time in 2004 for Bimota Tesi 2D superbike.

The hub-centre steering system separates the steering and suspension functions. It helps to separate braking forces from suspension movements making the bike more agile through corners and helping with the weight shift under braking.

What makes this superbike even more interesting is its design. The bike features composite handguards with integrated turn signals. The exhaust system is derived from the Vyrus 982 M2 bike. The wheels are the new forged “Bullet" carbon units from Rotobox which helps to keep the weight of the bike down. The braking system features the Brembo GP4 series while the suspension is equipped front and rear with Vyrus Push Rod Twin Pivot.

At the moment, Vyrus has been very brief in providing details of the bike. They have not even revealed how many units of this bike will be produced. Usually, such superbikes are not made in bulk and are mostly meant for enthusiasts and collectors. As for the price, it is definitely going to make your eyes pop.