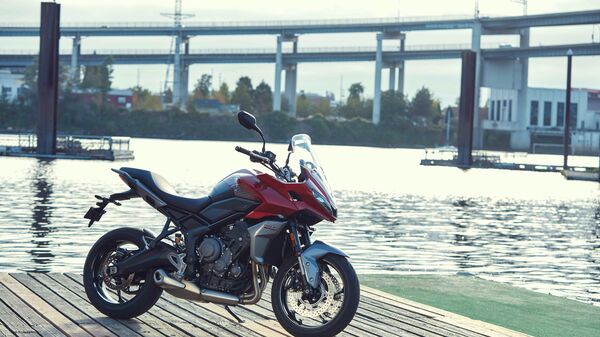 Triumph Tiger Sport 660 is headed for the Indian launch soon. The price announcement of the motorcycle is likely to take place within the next few weeks. The bike has been listed at the company's official Indian site, however, the launch is yet to take place. When launched, the bike will be positioned as the entry-level model in the company's Tiger family. It is likely to cost somewhere in the range of ₹8.5 lakh to ₹9.5 lakh (ex-showroom).

On the outside, the Tiger Sport 660 comes with a distinctive looking sporty half-fairing with LED headlights. The company has also given it a fairly modern looking TFT instrument console and the bike can accomodate 17-litre of fuel which is 3-litre over the Trident. Internationally, it has been made available in three colour choices - Lucerne Blue and Sapphire Black, Korosi Red and Graphite, and a minimalist Graphite and Black option.

Being based on the Trident, it uses the same main frame, however, the rear subframe is updated for the bike's additional load that it is designed to carry as an adventure tourer. Moreover, it also gets a longer swingwarm which is increased by 11 mm.

At the heart of the bike sits a 660cc three-cylinder engine which is carried over from the Trident. It also produces the same 81 bhp of power at 0,250rpm and 64Nm at 6,250rpm. The engine comes paired to a ix-speed gearbox and an optional up/down quickshifter.

Some of the key equipment on the bike include its non-adjustable 41mm USD fork and a pre-load adjustable shock with a remote preload adjuster.

When launched, it will lock horns with the Kawasaki Versys 650 motorcycle.