The TE-1 electric bike has been developed by Triumph Motorcycles and Williams Advanced Engineering.
By : HT Auto Desk
| Updated on: 10 Feb 2022, 11:09 AM 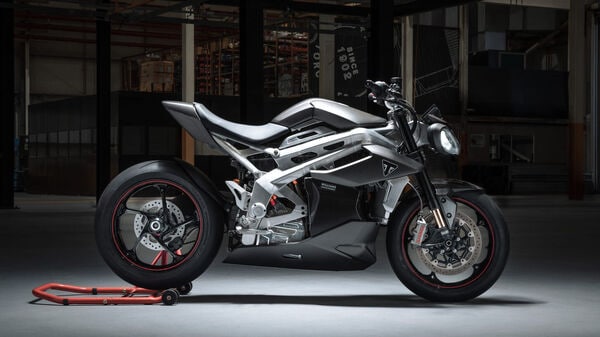 Triumph TE-1 electric bike prototype has finally broken cover. The UK-based premium bike maker has also announced the completion of the third phase of development of its battery-powered model. It was developed by Triumph Motorcycles and Williams Advanced Engineering.

On the outside, TE-1 draws design cues from the company's much popular Speed Triple RS model. It has a very familiar twin-pod headlight at the front which reminds of the Speed Triple RS. The bike has been built around a bolted subframe, and there is also a single-sided swingarm that lends it a premium appeal.

Some of the main hardware components on the bike include the use of Ohlin-sourced upside-down front forks and a rear mono-shock for suspension duties at the rear. For braking, it uses twin rotors at the front bitten by Brembo-sourced calipers and a single disc at the back.

At the heart of the Triumph TE-1 sits WAE’s 15kWh battery pack juicing up a powertrain with scalable integrated inverter and combined motor with silicon carbide switching technology and integrated cooling. This motor is likely to produce somewhere close to 180 PS. It will have a full-charge range of close to 200 km. Phase four of testing of the motorcycle is slated to end by mid-2022. This stage will include testing the bike on-road as well as race tracks.

Meanwhile, the upcoming Bajaj-Triumph Scrambler has been spotted for the first time. As per the available details in spy images, the upcoming bike seems to be carrying design cues from Triumph's existing product range, especially the Street Scrambler. (Read more details here)