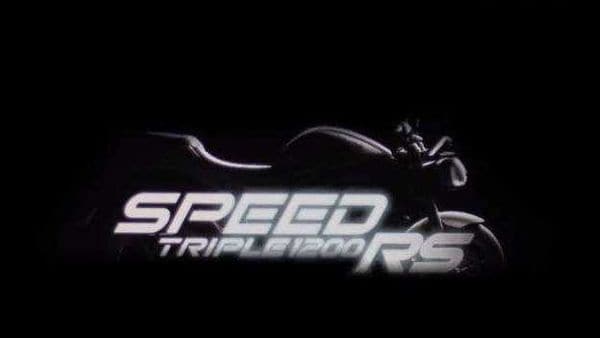 Triumph is yet to officially announce details on the technical specification of the new Speed Triple 1200 RS.

Triumph Motorcycles UK on Tuesday announced that it will reveal the new Speed Triple 1200 RS motorcycle on January 26.

The revolution is coming.

Along with the official announcement of the global launch, Triumph Motorcycles has also released a short video of the upcoming Speed Triple 1200 RS teasing its soundtrack, lights and silhouette.

Goes without saying, all eyes were on the bigger sibling in the Triumph naked range ever since the introduction of the Street Triple RS in 2020.

The teaser visual confirm that bigger RS will benefit from the same angry-eye makeover as the younger sibling. As suggested by the name, the updates won't be limited just to the exterior styling and the upcoming RS will boast the biggest, and likely the most powerful engine ever seen in the range.

The company is yet to announce details on the technicals specification of the new engine, while the hike in displacement figures is likely to help get through Euro5/ BS 6 norms.

Full details on the upcoming model will be revealed soon.

The Indian subsidiary of the UK-based bike maker will launch the awaited Trident 650 roadster in India soon. The bike has already been listed on the company website. In addition to this, Triumph Motorcycles India will also launch the Tiger 850 Sport which has also appeared on the Indian site. (More details here)