Triumph Rocket 3 GT to launch in India today: What to expect? 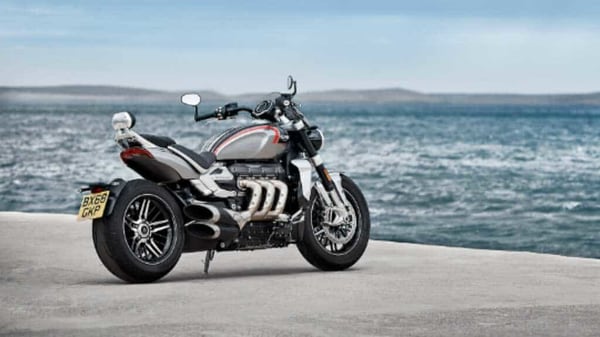 Triumph Motorcycles is on a launch spree as after the new Tiger 900 and Street Triple R, the company is now planning to introduce its most costly offering, the Rocket 3 GT in India.

For the record, the Rocket 3 is already present in the country and the 'GT' variant, as the name suggests, is a touring focused iteration of the Rocket 3 power cruiser. It is all set to rival the likes of bikes such as Ducati Diavel 1260 and Harley-Davidson Fat Boy.

In order to make this bike more touring friendly, the company has added additional touring focused equipment. Since it will be more generously kitted against the standard Rocket 3, expect it to carry a premium over the Rocket 3 which retails at ₹18 lakh (ex-showroom India).

In order to make the GT variant more relaxed, the company has tweaked the footpegs position on the bike which now comes more forward-set just like typical cruisers. Also, it uses touring-style handlebar for extended support for the rider. In addition to these basic tweaks, the bike has also been given a taller windscreen, adjustable pillion footrests, heated grips and a pillion backrest as standard. Apart from these updates, the rest of the bike remains similar to the standard variant.

At the heart of the Triumph Rocket 3 GT sits a 2,500 cc, inline three-cylinder, liquid-cooled engine that's known to produce 165bhp of maximum power and 221 Nm of peak torque.