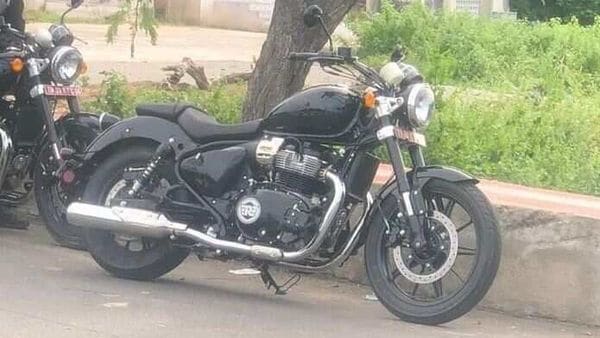 Royal Enfield is developing some very interesting models for the future launch. While the plans for the Meteor 350 have been delayed due to supply chain issues, there is a bigger 650 cc cruiser in the lineup which is expected to make an official public appearance in 2021.

The Royal Enfield's upcoming 650 cc cruiser has been spotted amidst road testing once again in the clearest image yet. It is going to come based on the 650 cc platform shared with the current 650 Twins (Continental GT and Interceptor).

The motorcycle will be bolted-on cradle frame which is identical to the Interceptor 650. Albeit, what's different is the use of a new subframe which has been introduced to suit the motorcycle's different riding dynamics and character. The use of a new subframe has allowed the automaker to use a different and lowered down saddle. For reference, Interceptor has a seat height of 802 mm, while this 650 cc cruiser will have much lower seat height, somewhere in the range of 750 mm to 780 mm.

The use of wide, pulled back handle bar, and forward-set footpegs will aid in providing a traditional cruiser riding stance. Also, the front end of the cruiser will be raked out in order to provide a better high-speed stability.

The front-end uses USD fork which is first for a Royal Enfield motorcycle,while the rear end has been equipped with traditional twin springs setup. Also, not to overlook the use of disc brakes on both the ends.

When looked upon closely, it seems to be sporting an asymmetric twin pod console, something similar to what will be available on the Meteor 350. Also, it would be safe to assume that it will get the same 'Tripper Navigation' feature as found on the upcoming 350 cc bike.

@royalenfield has a bigger '650 cc' cruiser in the pipeline. Some are calling it the new #Thunderbird650, but nothing is confirmed yet. No real competition in sight, especially when @harleydavidson #Street750 is going out!
Image credits to the respective owner. @HTAutotweets pic.twitter.com/w8dFa4gRhv

The bike isn't equipped with the LED headlamps which might be a big miss for some customers. When launched, pricing could start somewhere from around ₹3 lakh to ₹3.2 lakh mark.