Royal Enfield One Ride to take place on September 26th 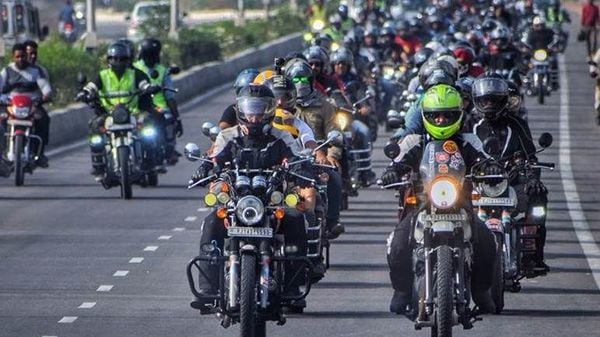 The 10th edition of Royal Enfield One Ride will be held across 35 countries on September 26.

Royal Enfield One Ride 2021 is being organised across over 400 cities in India, and 35 countries globally including Argentina, Columbia, Spain, Mexico, Peru, Chile, United Kingdom, Ecuador, France, Uruguay, Costa Rica, Indonesia, Australia, Korea, Japan, Singapore, Spain, Cambodia, Philippines, Thailand, Brazil, Dubai, France, Italy, and Germany among others. The company says that enthusiasts can either join a ride or host a ride by visiting the official website.

The company has launched a behavior change campaign to sensitise and encourage riders to adopt ‘Responsible Travel’ practices. Royal Enfield has also announced #LeaveEveryPlaceBetter tagline to kick start its journey towards going zero-waste on its rides and events. In order to achieve the same, the Classic 350 maker has also joined hands with civil society organisations like Saahas, Waste Warriors, Humanmatrix and Wildlife Conservation & Birds Club, in India.

The company says that its past efforts have ‘positively impacted the livelihood of local communities’ in the region of Ladakh where it has made efforts to educate the rider community to travel responsibly. “As part of its Social Mission of ‘Responsible Travel’, the brand has introduced several initiatives to empower the locals such as supporting over 60 homestays in remote locations in Ladakh, rural electrification with solar power impacting 682 households in rural Ladakh, tourist centres providing access to toilets & local food, and many more. Royal Enfield also works closely with local administrations to monitor waste management in these regions. This is part of Royal Enfield's larger program on promoting Responsible Travel and working with local communities at destinations that are frequented by its riders." the company noted in a press release sent earlier on Tuesday.