Royal Enfield also retails its Himalayan, Interceptor INT 650 and the Continental GT 650 bikes in the US.The Meteor 350 will be the most affordable Royal Enfield bike in the US.Royal Enfield introduced the new Meteor 350 in India in November 2020.
By : HT Auto Desk
| Written By : Prashant Singh
| Updated on: 08 Apr 2021, 12:13 PM 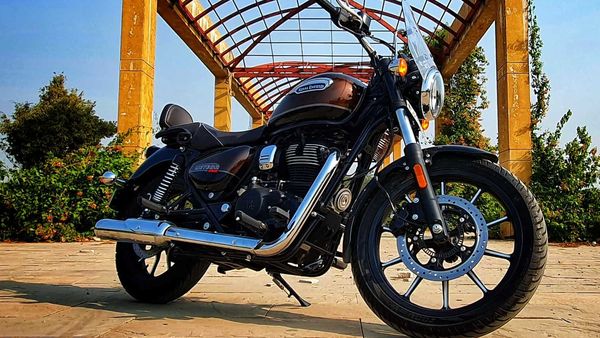 Meteor 350 is leaps ahead in terms of ride and handling. It feels surprisingly light and nimble for a 191 kg bike, especially on the roll.

Royal Enfield introduced the new Meteor 350 in India in November 2020. Afterwards, the bike has also been introduced in several international markets and is now headed to the US. It has been priced at $4399 ( ₹3.27 lakh) for the base variant, while the Stellar and top-spec Supernova variant has been priced at $4499 ( ₹3.35 lakh) and $4599( ₹3.42 lakh), respectively.

The American website shows that Royal Enfield also retails its Himalayan, Interceptor INT 650 and the Continental GT 650 bikes in the US. The Meteor 350 will be the most affordable bike from RE in the US where it will be sold through its authorised dealerships.

The Meteor 350 is an all-new motorcycle from the ground up. It comes based on a completely new J platform which will also be used by a slew of future Royal Enfield models. At the heart of the bike sits a new 350 cc single-cylinder engine which has been rated to develop 20.2 bhp of power and 27 Nm of peak torque. The transmission option includes a 5-speed gearbox.

Meteor 350 became the first bike in Royal Enfield's portfolio to get the Tripper turn-by-turn navigation system. It also features a new double downtube chassis instead of the single cradle frame found on the previous REs.

Royal Enfield will soon be launching new bikes based on the Meteor 350's J platform. The new-gen Classic 350 which is expected to break cover anytime soon now will utilise the same engine and platform.