Royal Enfield Interceptor 650 gets retro treatment in tastefully made rendering

Royal Enfield Interceptor 650 is popular among retro bike enthusiasts for its charming old-school looks.The use of chrome is pretty extensive on the bike in the rendering image.
By : HT Auto Desk
| Written By : Prashant Singh
| Updated on: 02 Apr 2021, 08:06 PM 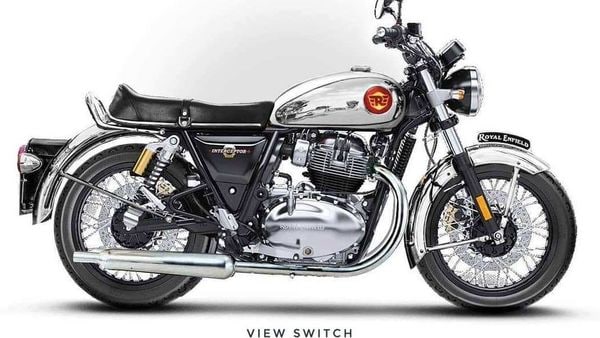 The use of chrome has been pretty extensive on the Interceptor 650 in the rendering image. Image Credits: Instagram/ View1919

The Royal Enfield Interceptor INT 650 motorcycle is already popular among retro bike enthusiasts for its charming old-school looks. Now an Instagram user named “view1919" has taken things to the next level. The user posted a rendering image of a modified Interceptor 650 which features some subtle yet impressive exterior changes, making the twin-cylinder bike even more classic looking, covered in chrome to the teeth.

As the image shows, the use of chrome has been pretty extensive. From fenders, fuel tank, engine, and grab rail, the shiny paint has taken over on the Interceptor for good.

The front fender is larger than the unit found on the stock bike, in addition, it also gets a metal plate with "Royal Enfield" brand name. The artist has also updated the attachment points of this fender, as found on classic bikes from the 80's. The header pipes on the motorcycle have also been updated. Other than that, there are minor tweaks introduced to the seat, and tail section, still, they are very subtle yet bring out quite a difference.